With drug resistant bacteria becoming a growing problem, alternative methods are being pursued to decontaminate air and surfaces; ultraviolet germicidal irradiation (UVGI) is one of these methods. UVGI uses short wavelength light in order to disrupt the genetic material of microorganisms, this disruption either kills the microorganisms or prevents them from replicating, for further information on UVGI (http://en.wikipedia.org/wiki/Ultraviolet_germicidal_irradiation). When considering that bacteria can acquire drug resistance, it is only logical to determine whether or not bacteria can develop UVGI resistance as well. Goldman and Travisano performed such a study on the development of UVGI resistance in E. coli cells, which were exposed to UVGI daily for 60 days.

This study used 24 samples from a parent E. coli strain, 12 of these samples were exposed to UVGI and 12 were held as a control group. The samples were grown on LB agar plates and exposed to UV-B light at 302 nm daily for 60 days, then held for an additional 20 days with no UV exposure. Plugs were taken from the UV exposure group and the control group in ten day increments throughout the trial.

At the conclusion of the 80 day trial, the samples taken from the plates were tested for UV survival. Figure 3 from the paper is reproduced here. It depicts the survival fractions of the samples over the course of the 80-day trial; the circles represent the control group, while the squares represent the UV samples. The UV resistance of the control group decreased during the trial with a survival rate of approximately 2/3rds of the survival rate of the ancestral strain for a 30 second exposure. 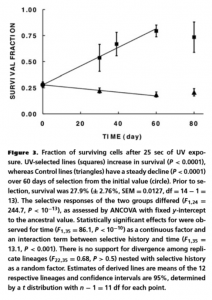 The survival rate of the exposed lines increased by approximately three times the ancestral strain for a 30 second exposure. Survival rates for other environmental factors such as starvation, salinity, desiccation, and fitness were studied for the exposed strain and the control group. The exposed samples showed an increased survival rate for both starvation (P = 0.009) and desiccation (P = 0.008) in comparison to the control lines. The survival rate of the exposed cells in the salinity trials was considerably less than the control lines (P < 0.001). The cells in the samples which were exposed to UVGI were significantly larger (P < 0.001) than the cells in the control group. This result is not surprising given that an increase in cell size can decrease the exposure (surface) area per unit volume, reducing sensitivity to UV light.

Very little work has been performed in the area of UV resistance and what has been done is primarily on E. coli. Further research on different microbes and the genetic changes which they undergo would greatly enrich this area and lead to the development for more effective protocols for UVGI decontamination in hospital environments.