You have been purposefully re-directed here from www.spacemicrobes.org

Sadly our fancy, custom built website couldn’t keep up with the times and had to be retired.  This page contains some bare-bones information about Project MERCCURI as well as some links to places with more information.

There were three goals to the project:

-Aim #1: Collect bacteria from built environments on earth and send them for a growth competition on the International Space Station (ISS)

-Aim #2: Collect swabs from around the ISS and identify the bacteria living on the space station

-Aim #3: Collect cell phone and shoe swabs from hundreds of volunteers around the country and compare those to each other and the swabs from the space station.

Summary of Aim #1:  We sent 48 bacteria to the ISS to see how well they grew in space compared to how well they grew on earth.  The idea here was two-fold.   Firstly, we wanted the scientific information in order to start thinking about long-term trips such as crewed missions to Mars.   The results of this analysis were published in 2016.  Along the way, we discovered that one of our bacteria was a new species, which we formally described in a 2015 publication (2015 genome publication here).  The second goal of this Aim was public engagement.  These bacteria were often collected by members of the public at large gatherings such as sporting events.   Bacteria send to the ISS were collected from environments as disparate (and photogenic) as the Liberty Bell, a Tyrannosaurs rex skeleton and a number of NFL and NBA games and venues.  The punch line:  1 species (Bacillus safensis) showed a difference between growth on the ISS and earth, growing significantly more on the ISS.  We described the genome of this bacteria in 2015.

Summary of Aim #2:  The most straightforward Aim!  We had astronauts collect 15 swabs from various places on the space station that were more or less analogous to places in an average home.   This analysis was published in 2017, and compared these samples to homes on Earth as well as to samples from the human microbiome.  The punch line: the microbiome of the ISS looks (reassuringly) more or less like a home, both of which look like places with a lot of human-associated bacteria.

Summary of Aim #3: Here we took advantage of the large collection events that were organized around the first Aim. Thousands of people took part in these collections and we asked many of them to swab their cell phones and shoes as part of the project.  The idea was to study the “biogeography” of the microbiome of these objects which is a fancy way of saying “who lives where”.  These samples were also compared to the samples from the ISS, as well as those from other studies on cell phones and shoes. These results were published in June of 2020. You can also explore the data in an online interactive visualization here.  The punch line:  the microbiome of cell phones is very different from that of shoes, and both contain surprising numbers of uncharacterized bacteria. 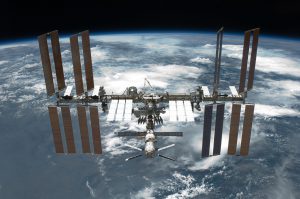 Between the ISS, the Science Cheerleaders, and bacteria… there was quite a lot of press about Project MERCCURI.  For years we tried to track this press and keep links on a page on the now defunct website.  A dump of those links can be found here, many of them still work but many do not.   Other information lost with the website included interactive versions of the trading cards created for the 48 bacteria that went to space and a cool map showing all the sampling sites around the country.

We were able to locate the following files of interest:

–A PDF containing images of all the “trading cards” created for the 48 bacteria that went to space.  This contains information on each bacteria including where it was found and why it’s interesting.  Here is another (much smaller) version with 4 cards per page.

–A PDF of the educator guide for Project MERCCURI which includes detailed information about the project and associated classroom activities.