New “Built Environment” papers that came out in the last couple of days, covering microbes in indoor air, flooded areas in Thailand, and on money bills. 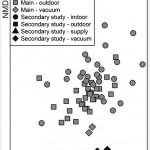 ..we used DNA sequencing of filter samples to assess the fungal and bacterial composition of air in an environmental chamber under different levels of occupancy, activity, and exposed or covered carpeting. In this office-like, mechanically ventilated environment, results showed a strong influence of outdoor-derived particles, with the indoor microbial composition tracking that of outdoor air for the 2-hour sampling periods.
Overall, this study revealed a smaller signature of human body-associated taxa than had been expected based on recent studies of indoor microbiomes. 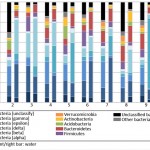 In this study, bacterial and fungal diversity in sediments and waters collected from ten flood areas in Bangkok and its suburbs, covering residential and agricultural areas, were analyzed using high-throughput 454 pyrosequencing of 16S rRNA gene and internal transcribed spacer sequences. Analysis of microbial community showed differences in taxa distribution in water and sediment with variations in the diversity of saprophytic microbes and sulfate/nitrate reducers among sampling locations, suggesting differences in microbial activity in the habitats.
Diversity of sulfate-reducing bacteria, related to odor problems, was further investigated using analysis of the dsrB gene which indicated the presence of sulfate-reducing bacteria of families Desulfobacteraceae, Desulfobulbaceae, Syntrobacteraceae, and Desulfoarculaceae in the flood sediments. 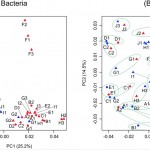 Here, we analyzed the bacterial and fungal communities in 50 air samples collected from five daycare centers and five elementary schools located in Seoul, Korea using culture-independent high-throughput pyrosequencing. The microbial communities contained a wide variety of taxa not previously identified in child daycare centers and schools. Moreover, the dominant species differed from those reported in previous studies using culture-dependent methods. …The bacterial community in the indoor air appeared to contain diverse bacteria associated with both humans and the outside environment. In contrast, the fungal community was largely derived from the surrounding outdoor environment and not from human activity. 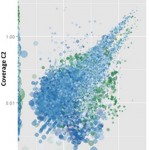 We investigated the microbiome of Indian paper currency notes using a shotgun metagenome sequencing approach. Metagenomic DNA isolated from samples of frequently circulated denominations of Indian currency notes were sequenced using Illumina Hiseq sequencer. Analysis of the data revealed presence of species belonging to both eukaryotic and prokaryotic genera…. Additionally, 78 antibiotic resistance genes were identified and 18 of these were found in all the samples. Furthermore, six out of 78 pathogens harbored at least one of the 18 common antibiotic resistance genes. 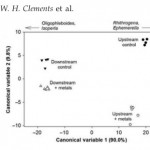 Natural variation in the structure and function of aquatic communities along environmental orspatiotemporal gradients can inï¬‚uence how systems respond to biotic and abiotic disturbances. Although these context-dependent responses are a well-established element of basic ecology, they have received little attention from an ecotoxicological perspective……This study presents three examples of context-dependent responses of benthic stream communities to contaminants. We show how longitudinal variation in community composition, the development of tolerance to contaminants and exposure to multiple stressors influence the historical context of a community and hence may determine community responses to contaminants.

And I’ll conclude with a popular science article in the category #BacteriaHysteria, but presented at #ASM2015: Share a Bathroom With Other People? Here’s Something You May or May Not Want to Know About Your Toothbrush – Liz Klimas – The Blaze 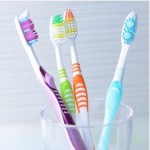 Research from Quinnipiac University presented annual meeting of the American Society for Microbiology this week described how fecal coliforms – a type of bacteria associated with fecal matter – was found on toothbrushes in communal bathrooms. “The main concern is not with the presence of your own fecal matter on your toothbrush, but rather when a toothbrush is contaminated with fecal matter from someone else, which contains bacteria, viruses or parasites that are not part of your normal flora,” Lauren Aber, a graduate student at Quinnipiac University, said in a statement.

For the latest microbiome and microbiology papers, visit my free and daily MicrobiomeDigest blog, where I will screen the literature so that you don’t have to.