Here are the new papers on microbes in the Built Environment I found this week, about salt-loving bacteria colonizing old houses, viruses in swimming pools, sewer systems, urban water and soils, and microbiota in urban mosquitos. Here is a good ol’ country song to match this post: This Old House by Stuart Hamblen. 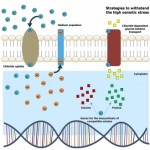 Halophilic microorganisms were traditionally isolated from an aquatic environment. There has been little research conducted into halophiles inhabiting the terrestrial environment in which historic monuments deteriorate. Salt efflorescence deposited on the walls is an observed phenomenon on the surface of historic buildings, and would favour the growth of halophiles. However, some conditions have to be fulfilled in order for efflorescence to occur: (1) the presence of salts, (2) porosity, (3) a source of water. Salt crystallization influences the material structure (cracking, detachment, material loss), but active growth of halophilic microorganisms may be a serious threat to historic materials as well, leading to aesthetical changes such as coloured biofilms, orange to pink or even violet stains. (…) 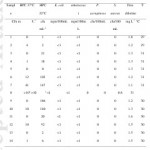 (…) The objective of this study was to examine the extent of viral contamination in indoor and outdoor swimming pools. Pools were examined for the presence of human enteric viruses (adenovirus, norovirus and enterovirus) and non-enteric viruses (papillomavirus and polyomavirus – BK, JC, KI, WU and Merkel cell). Bacteriological parameters were also evaluated. The analyzed pool waters met microbiological quality standards. Enteric viruses were not detected. On the other hand, papillomaviruses (…) and polyomaviruses (…) were detected in 9/14 samples (64%). (…) Results show that a variety of non-enteric viruses may be discharged in pool waters by various secretions and excretions from infected individuals or asymptomatic carriers. 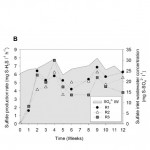 Coexistence of sulfate-reducing bacteria (SRB) and methanogenic archaea (MA) in anaerobic biofilms developed in sewer inner pipe surfaces favours the accumulation of sulfide (H2S) and methane (CH4) as metabolic end products, causing severe impacts on sewerage systems. In this study we investigated the time-course of H2S and CH4 production and emission rates during different stages of biofilm development in relation to changes in the composition of microbial biofilm communities. The study was carried out in a laboratory sewer pilot plant that mimics a full-scale anaerobic rising sewer using a combination of process data and molecular techniques (e.g. qPCR, DGGE and 16S rRNA gene pyrotag sequencing). (…) 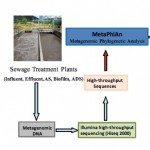 The broad-spectrum profile of bacterial pathogens and their fate in sewage treatment plants (STPs) were investigated using high-throughput sequencing based metagenomic approach. This novel approach could provide a united platform to standardize bacterial pathogen detection and realize direct comparison among different samples. Totally, 113 bacterial pathogen species were detected in 8 samples including influent, effluent, activated sludge (AS), biofilm, and anaerobic digestion sludge with the abundances ranging from 0.000095% to 4.89%. Among these 113 bacterial pathogens, 79 species were reported in STPs for the first time. (…) 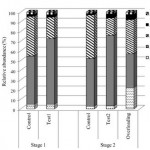 Linkage between reactor performance and microbial community dynamics was investigated during mesophilic anaerobic co-digestion of restaurant grease waste (GTW) with municipal wastewater sludge (MWS) using 10 L completely mixed reactors and a 20 day SRT. Test reactors received a mixture of GTW and MWS while control reactors received only MWS. Addition of GTW to the test reactors enhanced the biogas production and methane yield by up to 65% and 120%, respectively. Pyrosequencing revealed that Methanosaeta and Methanomicrobium were the dominant acetoclastic and hydrogenotrophic methanogen genera, respectively, during stable reactor operation. The number of Methanosarcina and Methanomicrobium sequences increased and that of Methanosaeta declined when the proportion of GTW in the feed was increased to cause an overload condition. Under this overload condition, the pH, alkalinity and methane production decreased and VFA concentrations increased dramatically. Candidatus cloacamonas, affiliated within phylum Spirochaetes, were the dominant bacterial genus at all reactor loadings. 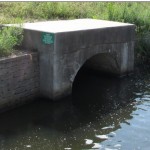 Aquatic ecosystems in urban environments are highly modified by human activity, engineering, and design. These systems are critical in delivering ecosystem services to urban residents, who comprise over 80% of the US population. Therefore, understanding the ecological functioning of these systems and integrating research across urban areas is of great importance. This Special Feature on Urban Aquatic Ecosystems was invited following a Special Session featuring these authors at the 2014 Joint Aquatic Sciences Meeting. 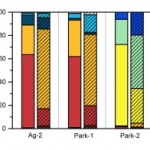 Nitrous acid (HONO) is a photochemical source of hydroxyl radical and nitric oxide in the atmosphere that stems from abiotic and biogenic processes, including the activity of ammonia-oxidizing soil microbes. HONO fluxes were measured from agricultural and urban soil in mesocosm studies aimed at characterizing biogenic sources and linking them to indigenous microbial consortia. (…) Genomic surveys of soil samples revealed that 1.5—6% of total expressed 16S rRNA sequences detected belonged to known ammonia oxidizing bacteria and archaea. Peak fluxes of HONO were directly related to the abundance of ammonia-oxidizer sequences, which in turn depended on soil pH. (…) The results suggest that biogenic HONO emissions will be important in soil environments that exhibit high nitrification rates (e.g., agricultural soil) although the widespread occurrence of ammonia oxidizers implies that biogenic HONO emissions are also possible in the urban and remote environment. 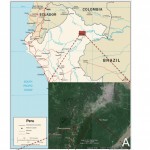 Mosquitoes serve as the primary mode of transmission for many tropical infections such as Venezuelan equine encephalitis virus, dengue virus, and malaria. Therefore, mosquitos are an important area of study for disease control. This study is part of a larger goal to examine the differences in gut microbiota of Culex melanoconion species across two different habitats: periurban and rural. Mosquitoes were collected from locations around Iquitos, Peru and their gut bacterial DNA was extracted and analyzed. Based on previous studies, it is believed that the bacterial flora will differ among mosquitoes reared in different locations.