Skip to content
home Scholarly Literature (Journals, Books, Reports) Effect of a houseplant on its environment

A new paper in Frontiers in Microbiology reports the effect of plants on microbes in the environment.  It’s about a plant in a box, so if you like cheesy 80’s music, you could play the song Living in a Box from the band with the same title. Here is the study:

In this study, the authors studied the effect of a spider plant on the microbiome of its environment. The spider plant (Chlorophytum comosum) is a very common house- and officeplant, because it is very hardy and almost impossible to kill. It makes small baby plants on stalks that are easy to grow into new plants. Previous studies have shown that this plant has a positive effect on the indoor air quality by absorbing contaminants such as ethylbenzene (see e.g. Sriprapat et al., DOI: 10.1016/j.ecoenv.2014.01.032).

A spider plant was placed in a glass chamber that was thoroughly cleaned with ethanol, bleach, and UV light, for a period of 6 months. The plant was watered once a week with tap water, to best mimic the situation in a regular household. Samples were taken from the plant leaves, indoor air, and chamber surfaces at the start of the experiment, and after 6 months. 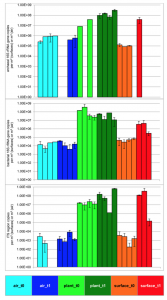 Microbial abundance was analyzed by qPCRs on bacterial, archaeal and fungal ribosomal RNA genes. While microbial counts on plant leaves and air remained constant, significant increases were found on the chamber surfaces for all three microbial groups.

The extent of increase was variable: the highest increase was determined for fungi (ITS region copies; up to 5 logs). For 16S rRNA gene copy numbers of Bacteria and Archaea an increase of up to 2 logs was detected. In contrast to the surrounding surfaces, the microbial abundance in the air and on plant leaves remained constant. An analysis of variance (ANOVA) showed significant variation of samples obtained from the indoor air, plant leaves, and surfaces for Archaea (P = 7.9âˆ— 10âˆ’5 ), Bacteria (P = 1.5âˆ— 10âˆ’3 ) and fungi (P = 7.9âˆ— 10âˆ’4 ). 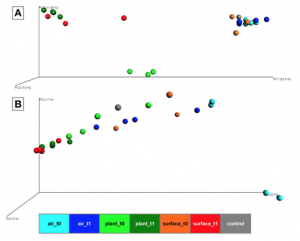 The microbial diversity was influenced by the plant as well. The authors generated 1.4 million bacterial 16S rRNA reads and 1.9 fungal ITS region reads using Illumina sequencing and analyzed them in Qiime. After 6 months of housing a plant, the chamber’s surfaces showed increased bacterial diversity and decreased fungal diversity; plant leaves remained stable. The microbial communities of the chamber surfaces were more similar to those of the plant after the experiment.

At the beta-diversity level, three distinct clusters appeared in a principal coordinate analysis based on Bray-Curtis distances of bacteria (Figure2A). The first cluster was composed of samples from the air and the surrounding chamber surfaces prior to the plant isolation and the control. (…) The ordination for fungi (Figure 2B) showed no distinct clusters of different sample groups, but similar changes in diversity along the PC1 axis (with a high variation of 22% explained).

LEfSE analysis of the bacterial and fungal core OTUs found 47 OTUs that discriminated between the different sample types. The plant was shown to be the main source of the microbes colonizing the chamber’s surfaces. The numbers of plant-associated microbes such as Paenibacillus, Planctomycetes, and spore-producing fungi went up after the 6-month incubation.

The authors recognize some limitations of this study. First, the experimental setting was very artificial; regular homes have many more surface types and variations in human and animal occupation. Secondly, only one plant in one system was investigated. Third, only two timepoints were studied and these were 6 months apart. Still, the study is a valuable contribution to our knowledge on plants in the built environment.

The authors conclude their study with the following statement:

The embellishment of built environments with indoor plants does not have an aesthetic relevance alone, indoor plants can act as a simple but efficient way to stabilize and increase diversity of beneficial microbes in the built environment and other enclosed systems for humans in the future such as space stations or manned space missions to successfully colonize other planets.