Lots of cool new papers to share. Unfortunately, many are behind paywalls. 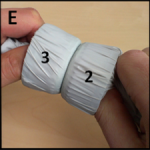 Healthcare workers frequently experience difficulties in complying strictly to hand disinfection protocols. This study was therefore aimed at the development of a hand rub with antimicrobial activity that forms a protective film on the hand, a so-called microglove, in order to enhance hand hygiene. (…) a formulation of 80% PVP and 20% M20 co-polymer with 0.9% BKC fulfils the elementary requirements for an antimicrobial microglove. 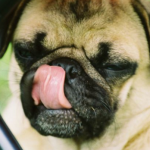 Two fecal E. coli isolates from 25 healthy dog-owner pairs and 16 healthy control humans were tested using three fingerprinting methods. The prevalence of within-household sharing of E. coli was 4%, 8% and 8% using PFGE, RAPD and ERIC-PCR analyses, respectively. Within-household bacterial sharing was more prevalent than across-household sharing (P< 0.05). According to questionnaire analyses avoiding the dog-owner behaviors such as allowing a dog to kiss or lick the owner’s face, sharing people food with dog and feeding it raw meat may decrease the chance of cross-species E. coli sharing.

Fungal compositions and diversities on indoor surfaces with visible mold growths in residential buildings in the Seoul Capital Area of South Korea – C. An and N. Yamamoto – Indoor Air ($$) (lots of pictures!) 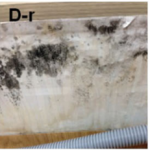 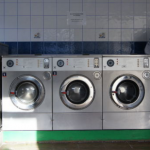 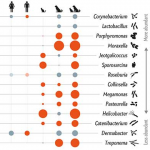 Men shed more bacteria into their surroundings than women do, studies have shown. Now scientists have found that men and women have different effects on the variety of bacteria inside a home, too. The variation comes down to skin biology and “perhaps to body size and hygiene practices,” note researchers who sequenced the genes in dust that had settled on the tops of doors in 1,200 homes across the U.S. Dogs apparently alter indoor bacteria more extensively than humans or cats. The bacterial signatures of each of these living beings are unique enough that by simply testing dust in a home, investigators can accurately predict if more women or men live there and if dogs or cats do as well.

Microbiota formed on attached stainless steel coupons correlate with the natural biofilm of the sink surface in domestic kitchens – Birgitte Moen – Canadian Journal of Microbiology ($$, no access even through Stanford) 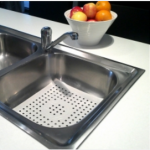 The microbiota of new stainless steel coupons attached to the sink wall for three months and sink wall surfaces in eight domestic kitchen sinks was investigated by next generation sequencing (MiSeq) of the 16S rRNA gene derived from DNA and RNA (cDNA), and by plating/identification of colonies. (…) The microbiota in the majority of biofilms was dominated by Moraxellaceae (genus Moraxella/Enhydrobacter) and Micrococcaceae (genus Kocuria). Results demonstrated that the variation in the microbiota was mainly due to differences between kitchens (38.2%) followed by the different nucleic acid template (DNA vs RNA) (10.8%), and that only 5.1% of the variation was a result of differences between coupons and sink surfaces. 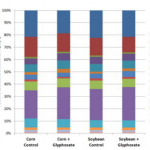 In this study, rhizosphere soil was sampled from rhizoboxes following 4 growth periods, and bacterial community composition was compared between glyphosate treated and untreated rhizospheres using next-generation barcoded sequencing. In the presence or absence of glyphosate, corn and soybean rhizospheres were dominated by members of the phyla Proteobacteria, Acidobacteria, and Actinobacteria. Proteobacteria (particularly gammaproteobacteria) increased in relative abundance for both crops following glyphosate exposure, and the relative abundance of Acidobacteria decreased in response to glyphosate exposure. 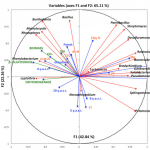 The objectives of this study were to evaluate how the soil microbial community changes over time after mining and soil reconstruction at the largest coal mine in Latin America. (…) 42 samples were collected from the seven sites and the V4 region of the 16S rRNA gene was sequenced on the Illumina HiSeq platform. Reads were classified to identify 525 genera from Bacteria and Archaea domains. The composition of the microbial community of post-mined sites was significantly different from the undisturbed sites. 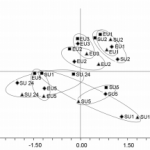 The soil environments of two abandoned uranium mines were chosen to analyze the effects of long-term uranium and heavy metal contamination on soil microbial communities using dehydrogenase and phosphatase activities as indicators of metal stress. (…) The results showed an evidence of microbial tolerance and adaptation to the soil contamination established during the long-term metal exposure and the key role of soil organic matter in maintaining high microbial enzyme activities and mitigating the metal toxicity. Additionally, the results suggested that the soil microbial communities are able to reduce the metal stress by intensive phosphatase synthesis, benefiting a passive environmental remediation and provision of vital ecosystem services. 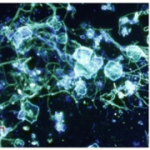 Bio-foaming is a major problem in solid separation in activated sludge (AS) wastewater treatment systems. Understanding the changes in bacterial communities during sludge foaming is vital for explaining foam formation. Changes in bacterial communities in the foam, corresponding foaming AS, and non-foaming AS in a seasonal foaming wastewater treatment plant (WWTP) in Northern China were investigated by high-throughput pyrosequencing and molecular quantification-based approaches.