New papers about microbes in houses, food, and waste or polluted sites. 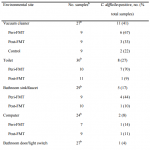 Households of R-CDI subjects in the peri-FMT period, and of geographically and age-matched controls, were analyzed for presence of C. difficile. Household environmental surfaces and fecal samples from humans and pets in the household were examined.  (…) Environmental cultures detected C. difficile on â‰¥ 1 surface in 8/8 (100%) peri-FMT households, vs. 3/8 (38%) post-FMT households and 3/8 (38%) control households (P = 0.025). (…). In conclusion, C. difficile was found in the household environment of R-CDI patients, but whether as a cause or consequence of R-CDI is unknown. If household contamination leads to R-CDI, effective decontamination may be protective. 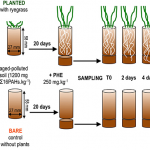 Over the last decades, understanding of the effects of plants on soil microbiomes has greatly advanced. However, knowledge on the assembly of rhizospheric communities in aged-contaminated industrial soils is still limited, especially with regard to transcriptionally active microbiomes and their link to the quality or quantity of carbon sources. We compared the short-term (2—10 days) dynamics of bacterial communities and potential PAH-degrading bacteria in bare or ryegrass-planted aged-contaminated soil spiked with phenanthrene, put in relation with dissolved organic carbon (DOC) sources and polycyclic aromatic hydrocarbon (PAH) pollution. (…) 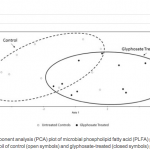 In commercial agriculture, populations and interactions of rhizosphere microflora are potentially affected by the use of specific agrichemicals, possibly by affecting gene expression in these organisms. To investigate this, we examined changes in bacterial gene expression within the rhizosphere of glyphosate-tolerant corn (Zea mays) and soybean (Glycine max) in response to long-term glyphosate (PowerMAXâ„¢, Monsanto Company, MO, USA) treatment. (…) These results demonstrate that long-term glyphosate use can affect rhizosphere bacterial activities and potentially shift bacterial community composition favoring more glyphosate-tolerant bacteria. 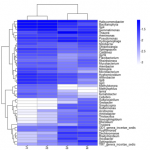 Constructed wetlands are ecosystems that use plants and microorganisms to remediate pollution in soil and water. In this study, two parallel pilot-scale vertical flow wetland and horizontal flow wetland (VF-HF) systems were implemented to investigate the treatment performance and microorganism community structure in the secondary effluent of an industrial park wastewater treatment plant (WWTP) with a loading rate of 100 mm/day near the Yangtze River in Suzhou City, East China. (…) In the VF system, the 16S gene and nirK gene were significantly correlated with depth, with the 16S gene showing significant correlations with the dissolved oxygen (DO) level (râ€‰=â€‰0.954, pâ€‰<â€‰0.05), which was determined by real-time PCR and high-throughput sequencing. Many types of bacteria capable of biodegradation, including nitrifiers, denitrifiers, and polyaromatic hydrocarbon (PAH) degraders (improvement of the BOD5/COD ratio), were observed, and they contributed to approximately 90 % of the nitrogen removal in the VF-HF system.

Review: A review of the environmental implications of in situ remediation by nanoscale zero valent iron (nZVI): Behavior, transport and impacts on microbial communities – Emilie Lefevre – Science of the Total Environment ($$) 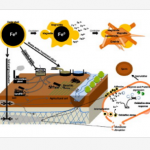 The increasing use of strategies incorporating nanoscale zero valent iron (nZVI) for soil and groundwater in situ remediation is raising some concerns regarding the potential adverse effects nZVI could have on indigenous microbial communities and ecosystem functioning. This review provides an overview of the current literature pertaining to the impacts of nZVI applications on microbial communities. Toxicity studies suggest that cell membrane disruption and oxidative stress through the generation of Fe2 + and reactive oxygen species by nZVI are the main mechanisms contributing to nZVI cytotoxicity. In addition, nZVI has been shown to substantially alter the taxonomic and functional composition of indigenous microbial communities. However, because the physico-chemical conditions encountered in situ highly modulate nZVI toxicity, a better understanding of the environmental factors affecting nZVI toxicity and transport in the environment is of primary importance in evaluating the ecological consequences that could result from a more extensive use of nZVI. 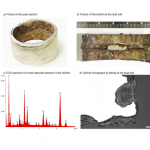 Offshore oil production facilities are frequently victims of internal piping corrosion, potentially leading to human and environmental risks and significant economic losses. Microbially influenced corrosion (MIC) is believed to be an important factor in this major problem for the petroleum industry. However, knowledge of the microbial communities and metabolic processes leading to corrosion is still limited. Therefore, the microbial communities from three anaerobic biofilms recovered from the inside of a steel pipe, exhibiting high corrosion rates, iron oxides deposits and substantial amounts of sulfur, which are characteristic of MIC, were analyzed in detail. (…) The microbial taxa and functional genes identified suggested that the biofilm communities harbored the potential for a number of different but complementary metabolic processes and that MIC in oil facilities likely involves a range of microbial metabolisms such as sulfate, iron and elemental sulfur reduction. Furthermore, extreme corrosion leading to leakage and exposure of the biofilms to the external environment modify the microbial community structure by promoting the growth of aerobic hydrocarbon degrading organisms.

Influence of season and type of restaurants on sashimi microbiota – S. MiguÃ©is – The European Journal of Public Health ($$)

In recent years, an increase in the consumption of Japanese food in European countries has been verified, including in Portugal. (…) The aim of this study was to evaluate the influence of the type of restaurant, season and type of fish used on sashimi microbiota. Methods: Sashimi samples (n = 114) were directly collected from 23 sushi restaurants and were classified as Winter and Summer Samples. (…) The need to implement more accurate food safety systems was quite evident, especially in the warmer season, as well as in restaurants where other kinds of food, apart from Japanese meals, was prepared. 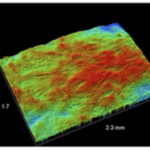 Various surfaces associated with the storage and packing of food are known to harbor distinct bacterial pathogens. Conspicuously absent among the plethora of studies implicating food packaging materials and machinery is the study of corrugated cardboard packaging, the worldwide medium for transporting fresh produce. In this study, we observed the microbial communities of three different store-bought fruits and vegetables, along with their analog cardboard packaging using high throughput sequencing technology. We further developed an anti-biofilm polymer meant to coat corrugated cardboard surfaces and mediate bacterial biofilm growth on said surfaces. (…) 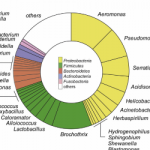 The aim of this study was to disentangle the microbial diversity on porcine musculature. The hypervariable V1—V2 region of the 16S rRNA gene was amplified from DNA samples of clinically healthy slaughter pigs (n = 8). (…)We conclude that i.) next-generation sequencing technologies help encompass the full content of complex, bacterial contamination, ii.) psychrophile spoilers dominated the microbiota and iii.) E. coli is an effective marker species for pork contamination, as it was one of very few abundant species being present in all samples.