Over dinner the other night, a friend brought up ongoing public health efforts to get people to stop washing raw chicken because it spreads Campylobacter onto kitchen surfaces. I have to confess that I have been washing, drying and salting a raw chicken nearly once a week for years, following Judy Roger’s (Zuni Cafe) fabulous recipe for roast chicken. We have reported on chicken washing before (see http://microbe.net/2012/11/12/a-microbiology-of-the-built-environment-story-of-the-day-dont-wash-your-chicken/) but washing raw chicken is a surprisingly hard habit to break. There was some more recent press on this topic back in June in honor of Food Safety week (in the Mirror and BBC News), including this “germ-vision” animation of bacteria flying onto kitchen surfaces (not that any self-respecting germaphobe would keep clean plates of food next to the sink). Try the recipe but don’t wash the chicken first. All that salt and cooking will take care of the bacteria. 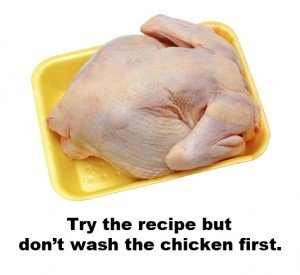