Note from Jonathan Eisen.  This is a guest post from Srijak Bhatnagar a microbiology graduate student at UC Davis.

Some of the best conferences arguably are the small one. Instead of the grand size and rapid pace, these warm gatherings over a period of few days allows for budding 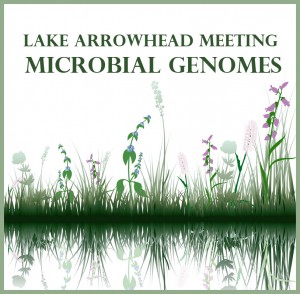 researchers like me to listen to some really good science. The provide ample time and opportunity to actually interact with scientists behind it. One gets to socialize, have fun, and bounce their ideas, all the while “sciencing around”.  I got to meet with not only the researchers who do science but also people behind the scientific databases and networks like NCBI, the backbone of science. It’s the close setting of the Lake Arrowhead  Microbial Genomes, which allowed me to voice my opinions, frustrations and recommendations in person, get an instant feedback. I also learned the about the issues which people from NCBI face. I have a new found respect for the brave souls at places like NCBI, who dare to make our science easily human usable.

The conference also had a sponsored session on built environment microbes, sponsored by the MicroBEnet and Sloan foundation. It brought more people to get going on the topic of indoor environment. Most people come across the advertisements to the “99.9% bacteria” killing solutions, but there is much more to built places than just bacteria. Fungi for one are very abundant, in our kitchens, our bathrooms, our refrigerators and even our dishwashers, a home to thermophillic fungi. The ever percolating in air in our indoor environment assures a good dosage of fungal spores. So much is the prevalence and persistence of the awesome fungi that they have made there way to our built environments of outer space. Yup, they grew and ate their way through Mir, the Russian space station and they’re now could possibly be colonizing the International Space Station. Jason Stajich from UC Riverside stood up on this front and talked about the fungi, the fungalDB, the lack of resources for ITS identification of fungi and the 1000 fungal genome sequencing project. The are important resources which the fungal field is lagging behind and could use some more attention. So while the fungi are in our offices and homes, they are not all bad. So who are they and what are they doing?

Another “bug beyond bacteria” are the archaea. While they exist everywhere in soil, water and what not, they’re in present in our built spaces too. They’re not all extremophiles.  Laura Sauder from University of Waterloo presented an example of archaea in our built environment. She talked about the abundance of ammonia oxidizing archaea in the aquaria at our homes and the waster water treatment facilities. They compete with ammonia oxidizing bacteria for ammonia and have a higher affinity for it. So I wonder what about other archaea, the ones in lurking out in our water heaters and arrives on us in the shower or the halophiles, which might get dragged into our homes from salted roads. I hope the built environment project looks at some of these niche micro-environments that surround us and let’s see what picture emerges from the pieces put together by it.