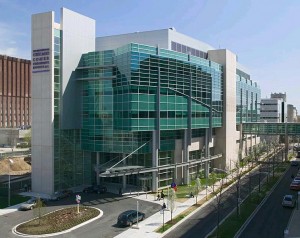 The University of Chicago has just opened a massive new hospital on the university campus. Jack Gilbert is PI on a study of the evolution of the hospital microbiome funded by the Sloan Foundation. The evolution of the microbiomes in a set of hospital rooms is being studied continuously beginning before the hospital accepted the first patients and continuously for one year. Some novel building science aspects of the study will help researchers determine the impact of building environmental factors on the microbiome in each room studied.

As part of the process of designing the study, the Sloan Foundation sponsored two meetings, one in June 2012 and a second one in January 2013. The report from the first meeting is now available as a paper on the Standards in Genomic Science web site.

The abstract of the paper reads as follows:

“This report details the outcome of the 1st Hospital Microbiome Project workshop held on June 7th-8th, 2012 at the University of Chicago, USA. The workshop was arranged to determine the most appropriate sampling strategy and approach to building science measurement to characterize the development of a microbial community within a new hospital pavilion being built at the University of Chicago Medical Center. The workshop made several recommendations and led to the development of a full proposal to the Alfred P. Sloan Foundation as well as to the creation of the Hospital Microbiome Consortium”

Second Meeting: A report and a paper are now being prepared to report the meeting proceedings and to discuss in further detail many of the important microbiology-building science questions discussed at the second meeting. Check back here soon for news of the latter report and paper.