Does heavy drinking affect the bacteria in your living room air? I don’t know, but some work I saw at ASM suggests that it might. At the poster session on Day 3, Valdis Krumins from Rutgers had a poster reporting efforts to understand the effect on airborne bacterial concentrations (or, at least, their ribosomal 16S and 18S genes) of some common volatile organic chemicals (VOCs, i.e., organic chemicals commonly found in the gas phase at typical environmental conditions. The organic chemical species he studies are commonly found in indoor was well as outdoor air. The studied focused on growth of bacteria “normally” found in outdoor air in various coastal new Jersey environments. He reported typical outdoor airborne concentrations of bacteria ranging from 10^4 to 10^5 in the environments studied. Some of the organic chemicals he used are also common and even found at higher concentrations indoors than outdoors, although the experimental concentrations used in Krumins experiments were far higher than those usually found either indoors or outdoors. It occurred to me that there is the possible exception of ethanol concentrations in the air of a bar or in a living room during television viewing by beer-guzzling football fans. In general he found higher ratios of 16s genes of the VOC-fed bacteria than of the controls.

Many Legionnaires Disease cases are attributed to water distribution systems, especially cooling towers that form a critical part of air-conditioning systems. Tamara McNealy (Clemson U.) studied the effect of gold nano particles on Legionella p. biofilms, Since she was looking at metal interactions, I asked her about other metals, ones that might be used for cooling tower water circulation, e.g., stainless steel, copper, and galvanized. It turns out her lab has looked at these metals although that was not what she reported on at ASM in Denver. But the copper industry has been pushing its product as a “natural” biocide with useeful antimicrobial properties. If I understood McNealy correctly, their work has not supported that claim, at least not with respect to Legionella p.. Of course contact time in a piping system would be expected to be a critical factor in piping, so only a small part of the water flowing through a pipe might actually have significant contact time. But McNealy’s focus was not on piping but on biofilms, and many investigations of cooling tower water have focused on the biofilms on the surfaces of the water tanks, typically open to the air. Cleaning these tanks to remove the biofilms is an oft-recommended preventive or remedial measure. Can metal nano-particles added to cooling tower water assist in preventing Legionella p. growth in air-conditioning water systems? McNealy plans to look at other metals now that they have shown an effect of their gold nano-particles. 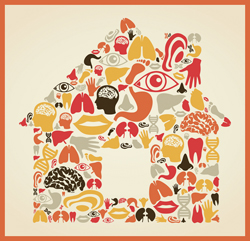 One thought on “Architect at ASM, part 2 – more notes from a building ecology perspective”