Skip to content
home Space The Saga of the Space Plates, Part 2

Microtiter plate readers are often used for measuring optical density in liquid media, and this is what we were planning to do. However, they are general purpose, programmable instruments, and there’s no rule that says you have to use them this way.

It occurred to me that all of our problems stemmed from the difficulties of dealing with liquids in zero gravity. For various historical reasons mostly related to limitations of Eisenhower-era spectrophotometers, microbiologists usually do growth curves and other quantitative procedures in liquid media, and most other things on solid media in Petri dishes. This made sense when your instruments could only take analog measurements of blobs of cells measured in inches, and were 100% manual.

Well, bacteria do different things on solid media than they do in liquid culture. Motility matters. Adhesion matters. Secretion matters. These things make a big difference in what you see on a plate, and because of this, classically trained microbiologists are taught to think of experiments on solid media in non-quantitative terms. This is entirely appropriate… if you are using classical instruments. A modern plate reader is a precision robot that can do pretty much whatever you program it to. Normally one wouldn’t go down this line of reasoning because a liquid culture is easy to set up. However, as you saw in my previous post, liquid culture is a serious headache if you don’t have gravity to help you keep the liquid where you left it.

So, we tried a simple experiment. We filled each well in a 96-well plate with a little plug of molten agar with LB and glycerol (these things have to survive freezing). This created 96 itty bitty Petri dishes, onto which we smeared cells. We then programmed our microplate reader to read a 15×15 grid in each well every 20 minutes. As the colonies grow, their edges intersect more and more of the read points. As their density increases, we they become more opaque. As you increase the read density and take more frequent time points, the aggregate effect will more closely resemble a measurement in homogeneous conditions — that is, it will more closely resemble data from liquid culture. Happily, robots are accurate, diligent and patient.

What does this look like? In one of our test, Jenna set up a fifteen-by-fifteen grid, and left out the 48 points in the corners that would have read through the vertical walls of the plate. This is the raw data for twelve of the wells : 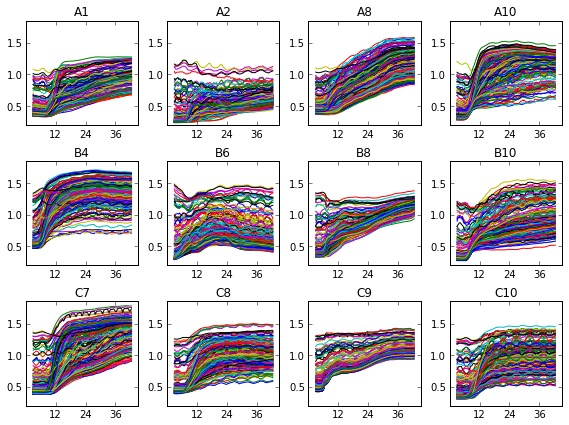 We can see that, uh, something happened. We’re going to have to do some more data processing before this makes any sense. If you just sum over all this data, things are a bit more clear.

As you can see, we didn’t capture very many logs in this test. The average optical density of the 177 points per well ranges from about 0.5 to about 1.5-ish, or about one doubling, or a bit less in most cases. This doesn’t allow for a very accurate measurement of growth rate. That’s why I’ve broken one of the other ironclad rules of microbiology, and shown these growth curves in linear instead of log scale. I’ll be looking over my shoulder for for a while in case my rotation professors try to shank me in the lunch line with Pasteur Pipettes.

We’ve got some work left to do. We’ll do our next test with clear media instead of the regular cloudy brown LB-agar we used in this test. We’ll try actually running a standard. We’ll try zeroing the initial readings. We’ll try reading optical channels besides 475-nm. We’ll make sure the media’s autofluoresce doesn’t eat into the instrument’s dynamic range. These sorts of optimizations are more tractable than fabricating a device for aerobic containment of liquid cultures. And testing it. And getting flight certified.

For readers who were spent the weekend looking forward to a cool engineering solution to the liquid cultures in zero gravity problem, I apologize. I often try to solve problems by changing the subject and waving colorful objects around.

Speaking of which, doing our measurements on solid media lets us do something awesome that we can’t do with liquid cultures : Make pictures! Because the cells we are observing are attached to a physical place associated with a read point, we can treat the measurements as 177 pixels. 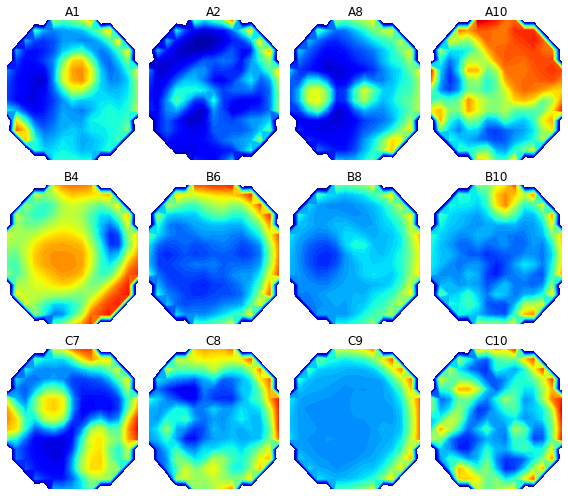 The colors here represent optical density. Blue is low OD (closer to clear), and red is high OD (more opaque). Of course, this is from one time point. If you string the time points together, you get a neat little time-lapse movie. Here is how the optical density in well A10 evolved over over forty-two hours and twenty minutes :

This is how we are going to measure bacterial growth in zero gravity. I’ll be listening for the scraping sound of microbiologists sharpening their Pasteur pipettes.

7 thoughts on “The Saga of the Space Plates, Part 2”