Skip to content
home Citizen Science, Meetings and Talks, Methods and Tools ASM 2013 and the challenges of citizen science

Im a graduate student in Jonathan Eisen’s lab and had a chance to attend this year’s installment of the ASM general meeting was in Denver last month. 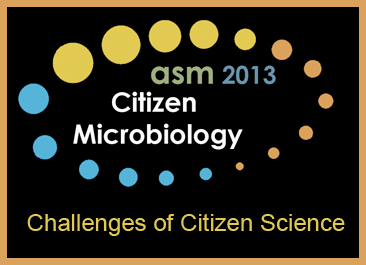 Among the hustle and bustle of a slew of talks at the ASM-2013, I got a chance to attend the Citizen Microbiology  session . The session was convened by Jonathan Eisen and David Coil. Like the many other sessions they’ve been convening across the country, it included talks from scientists working toward the goal of studying our manmade ecosystems – our hospitals, our schools, our homes and what not. The session included many good talks such as Jack Gilberts’ home microbiome project and Antonio Gonzalez’s the american gut project. These session got me thinking that while the science behind this is not only cool but also necessary, what’s more central to the success of such efforts is public participation. Called citizen science, these projects rely on crowd sourcing part of the project; anywhere from the sample collection to some aspect of analysis. The biggest hurdle I believe is to get public motivated. Not only the scientific facet seems alienating to people, but also the lack of willingness could be an issue. Any good marketing “Mad Man” could tell you, simplify and sell. I believe that we scientist are really good at science but not so much on layman english, unless you’re Carl Zimmer. We need to make people understand the science without making it too complicated. But that’s not good enough. We need to sell science.

Understanding and interest are two different attributes. We need to make science fun, easy and to some extent effortless. The public outreach has to get people to believe that they are making an important contribution to society. We need to make them believe that swabbing a surface is as important as landing on moon (may be not quite that big, but you get the picture). Additionally we need to remember that public is not only the 20-50 year olds. We need to incorporate our school systems into it. We need to reach to the people the Disney way – through the kids. We need to have outreach sessions in our schools, where we can go with simple experiments to entertain the kids and get them interested in science. Supply them with sampling kits and get them into the mix. Get their teacher incorporated, develop partnerships with K-12 schools. And that’s our investment into a future generation of scientifically aware and conscious populace. Furthermore, what became apparent from the talk of Darlene Cavalier is the need for a legal and legislative framework to make sure the science remain public and the privacy remains ensured. While these thoughts raced in my mind, I had the opportunity to learn about several public domain science projects that Scistarter has initiated. While a lot needs to be done to make the citizen science framework foolproof, initiatives like the Home Microbiome, the American Gut and Microbiology of Built Environment are the heralding a new era of public science. Im eagerly looking forward to a world, where everyone is a scientist.

2 thoughts on “ASM 2013 and the challenges of citizen science”