In my last two posts I described the process of developing the microbial growth experiment we will be running aboard the International Space Station. We’ve tackled growth assays on 96-well plates in zero gravity, at least in theory. How well will this actually work on aboard the space station? To find out, Jenna, Wendy and I boarded a plane to Houston and met up with Mark Severance, our conspirator/colleague. Mark lined up an action-packed space hardware hacking marathon with our payload integrator, Nanoracks. He also got us access to the Space Vehicle Mockup Facility at Johnson Space Center, and made a little time for a quick behind-the-scenes tour. First, the tour!

A visit to Johnson Space Center and the other core NASA facilities should be an important part of the education of each and every human. Every person should spend a couple of hours contemplating the Blue Marble and Pale Blue Dot, and every person should have a chance to walk around the machines that made those images possible. It is an overwhelming experience.

Up close and personal, the Saturn V rocket doesn’t look futuristic. It looks like something familiar. You can see the little blue smudges on the metal around welds. You can see the fingerprints and fixes, and little scratches from hand tools. You’ll recognize little things you can find in your local hardware store; nuts and bolts, screw and rivets. The rocket is the work of master machinists, and they left their fingerprints all over their work.

The machine itself is the most powerful… thing ever made. The Saturn V output is 190 gigawatts. That’s almost twice the power output of France, at 102 gigawatts.

Let me say that again. We are talking about a machine that is almost twice as powerful as France. France. NASA keeps it in a shed out back, on a plinth of astroturf. Imagine a ‘73 Pontiac had a child with an Elder God from the Lovecraft universe. That’s the Saturn V. 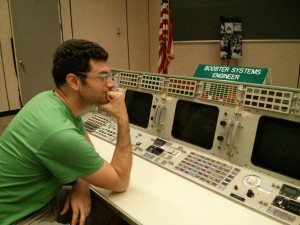 We also got chance to peek in the Apollo Mission Control National Landmark, which saw use until 1992. I’m just barely old enough to remember the loss of the Challenger, so it was a bittersweet moment to sit at the Booster Systems Engineer station.

Meanwhile, if you look closely at this photograph, I think this is probably exact moment Wendy decided to start mapping out the career steps she’ll need to take to become an astronaut herself. You’ll note she’s at the Flight Surgeon’s station. 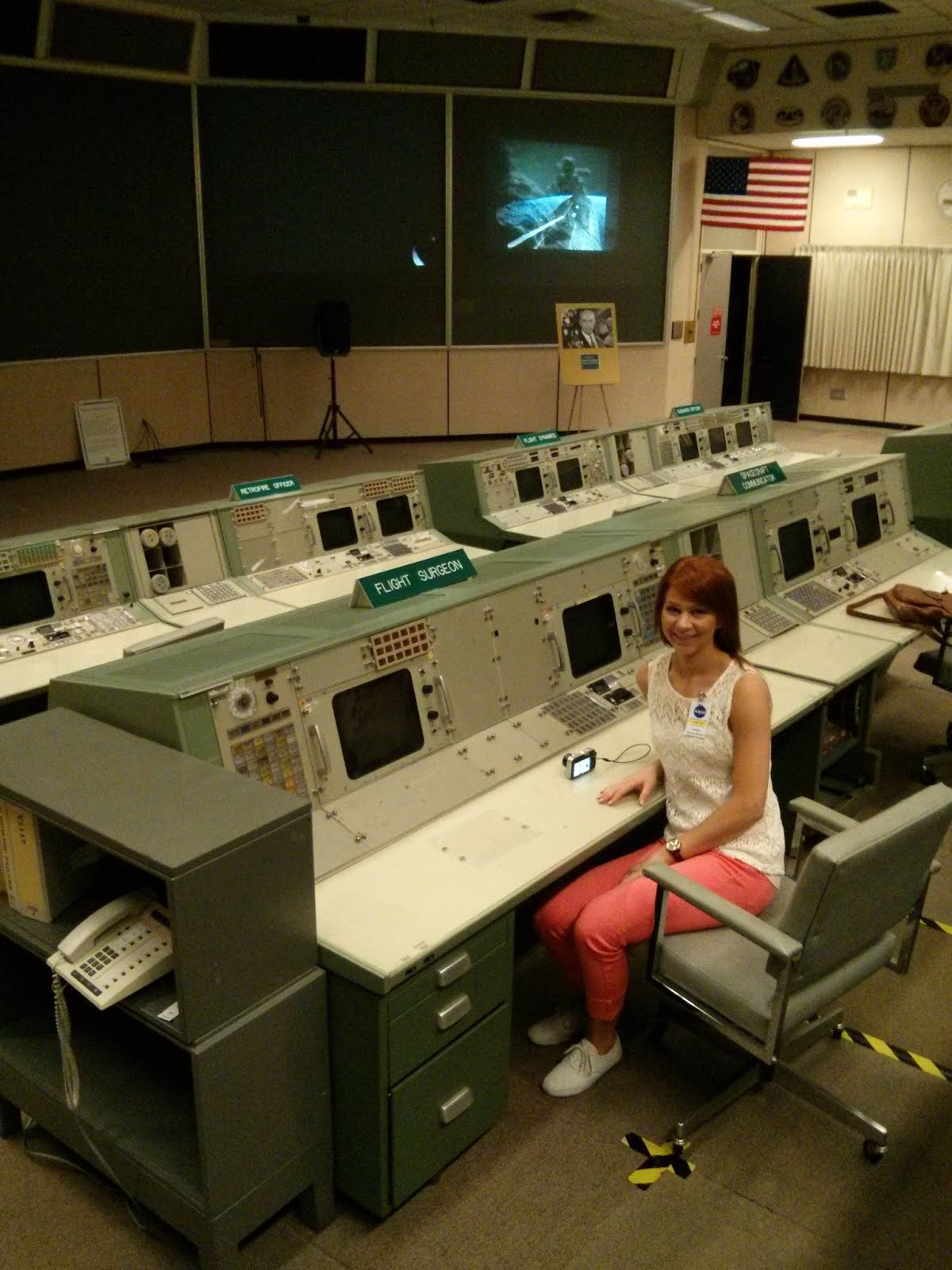 We then skedaddled over to the Space Vehicle Mockup Facility to get an idea of what the Space Station is like inside. 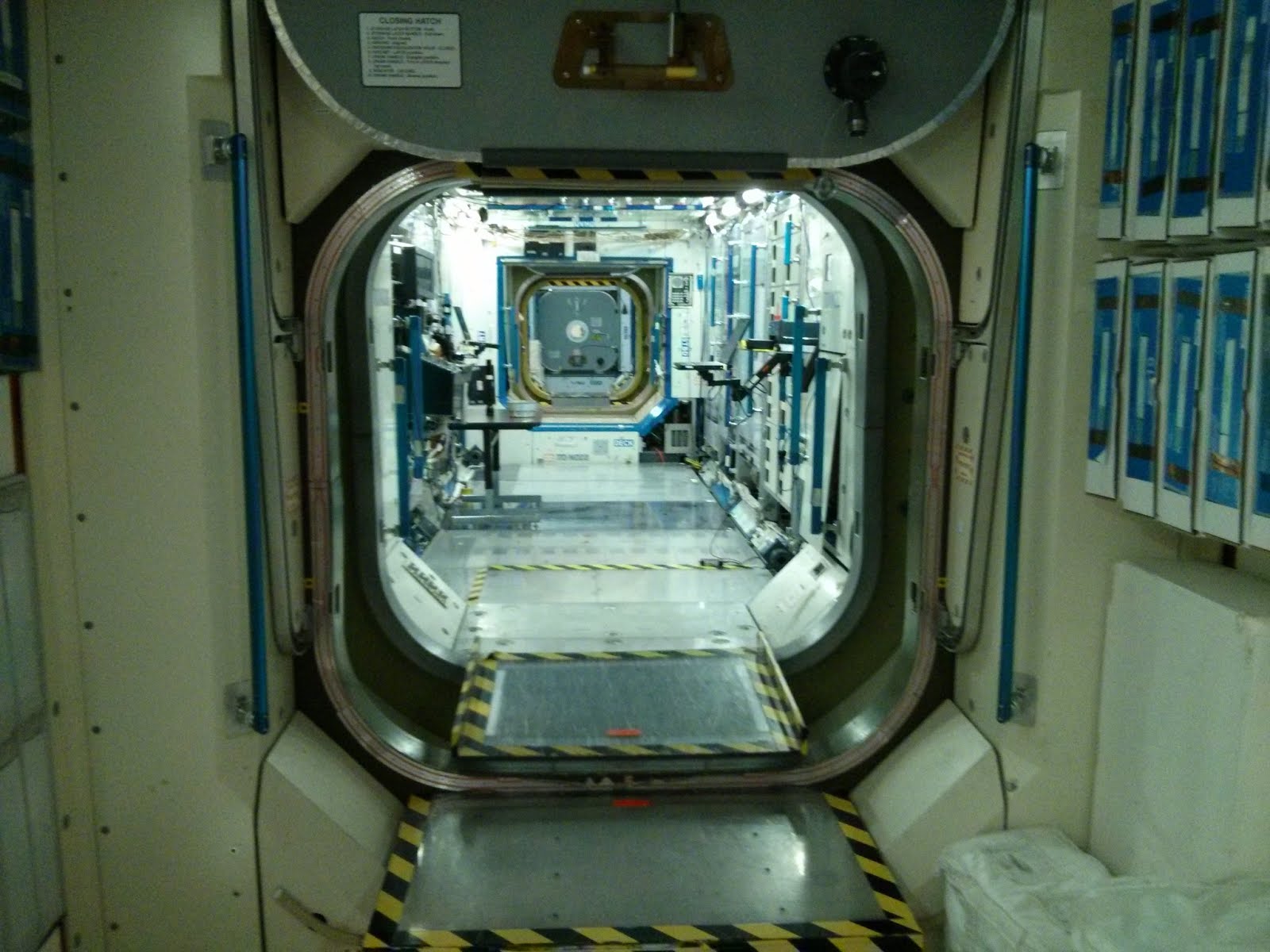 So, what is it like? One thing that was surprising (to me, at least) is how big it is. The International Space Station has somewhat more internal volume than a modern jumbo jet (say, a 777), except it isn’t all in one piece. As a result, it doesn’t feel like a vehicle. Vehicles don’t have… neighborhoods. It feels more like you’d built a small city and decorated it like the inside of an airplane.

Mark, Wendy and Jenna took lots of notes about possible places to ask the crew to collect surface swabs. For my part, I did what any mature, responsible scientist would do, which is to revert to my ADHD nine-year-old self. This consisted of poking, pinching, prodding, opening and peering inside every titanium doohickey and Nomex tchotchke whilst maintaining a rolling fusillade of irrelevant and probably annoying questions, and totally failing to write anything down. For once, there was no need; it’s all pretty much etched into my brainpan forever.

One of the things that I became totally fascinated by are the blue anodized aluminum hand/foot grab rails. I’m pretty convinced (without any evidence whatsoever) that different anodized surface treatments will support very different microbial communities and transmission patterns. Check out this video about how anodization works by Bill Hammack :

See? Totally fascinating. The process transforms the aluminum surface into a honeycomb of ruby/sapphire stuff, and then fills the pores with various weird metal dyes and polymers. Different treatments must produce wildly different chemical, physical and electromagnetic environments on the scale of bacterial cell. I somehow made it through the morning without grabbing the nice polite NASA guy by his lapels and shouting about the stability of phospholipid bilayers in the presence of periodic discontinuities in electric potential and the high likelihood of phylogenetic anisotropies in this effect due to different membrane chemistries exhibited by different organisms. I bet if we understood those interactions really well, we could be very, very specific about what organisms we inhibited and what organisms we encouraged by picking just the right combinations of voltage, etching time and dye.

I think I asked about fifty questions to which the answers amounted to, “Dude, they’re handles. They’re made of aluminum. They’re blue. Chill out.”

Then it was time for our first meeting with Nanoracks, which I’ll describe in the next post.

2 thoughts on “The Saga of the Space Plates, Part 3”