Boulder, Colorado just experienced its 100-y flood and the Front Range of Colorado has been devastated by damage to thousands of homes, hundreds of roads, not to mention devastation to the natural landscape. Household damage due to water intrusion is not only financially and psychologically devastating, but the growth of microbes in the home following a flood may also lead to health risks for the inhabitants (Ahern et al., 2005). Extensive water damage after hurricanes and floods increases mold contamination in buildings  (Fabian et al., 2005; Riggs et al., 2005; MMWR, 2006). 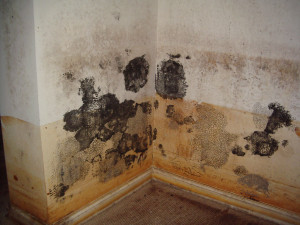 Mold from a flooded home (http://www.markshomeinspection.com/blog/)

After Hurricanes Katrina and Rita in New Orleans, visible mold growth was documented in 44% of the residences (Riggs et al., 2005), elevated air concentrations of mold spores were measured outdoors and indoors (Solomon et al., 2005), and endotoxin levels were elevated in water-damaged homes (Rao et al., 2007).  The CDC recommends that in homes that have been wet for more than 2 days, remediation should occur quickly and exposure to mold-contaminated materials can cause adverse health effects in susceptible persons (MMWR, 2006).

Respiratory illness and asthma exacerbations following flooding in New Orleans was found to be positively associated with exposure to water-damaged homes; exposure included just being inside and not participating in any clean up activities.  Following Hurricanes Katrina and Rita in 2005, in which 80% of New Orleans was flooded, Cummings et al. (2008) showed a strong association between exposure to water-damaged homes and respiratory issues. Use of the N-95 FF respirator reduced respiratory symptoms, presumably due to decreased exposure to airborne biocontaminants. Chew et al. (2006) tracked biocontaminant concentrations throughout the New Orleans remediation effort and measured only a slight decrease in biocontaminant concentrations after household remediation. In a follow-up study two years after the hurricanes, Adhikari et al. (2010) showed slight decreases in biocontaminant levels compared to those measured directly after the hurricane. Fabian et al. (2005) highlighted similar results: more than 3 months after remediation efforts, indoor air quality was still poor and dominated by biological particles in flooded homes in Colorado.

Although it has been hypothesized that flood-related health effects can be mitigated or prevented through remediation, the available remediation methods are often expensive and their utility in reducing microbial exposures remains poorly understood.  Flood remediation typically includes drying all wet materials, removing water-soaked flooring and damaged furnishings, replacing drywall and wall coverings, and washing/disinfecting all interior wall cavities, drying remaining structure, and treatment with a chemical biostatic agent (Chew et al., 2006). The use of respirators has been strongly recommended when inside water damaged homes. In-room air cleaners and N95 masks may also be helpful.  Good ventilation is essential while remediating.

Reports differ on whether remediation efforts are successful at reducing indoor concentrations of microorganisms.  Fabian et al (2005) reported that indoor levels remained elevated in remediated homes compared to outdoors. Whereas Chew et al. (2006) reported that indoor levels were mostly reduced compared to before remediation and outdoors. Improved remediation methods would be essential to reducing exposure and health effects after flooding and to help residents move back into their homes quickly.

Be careful out there, front range Colorado communities and others who face floods, as you courageously deal with the aftermath of the flood.  More information about floods and indoor air quality can be found at http://www.bouldercounty.org/flood/health/pages/flair.aspx.