Many indoor environmental investigators have attempted to use volatile organic compounds (VOCs) emitted by microbes as an indicator of the presence or potential health relevance of the indoor microbiome. These compounds emitted by microbes are generally referred to as MVOCs. The airborne concentrations of MVOCs is usually too low for characterization by the usual indoor air VOC sampling and analytical methods, but extraction of MVOCs from dust appears to be an effective way to identify and quantify the presence of MVOCs indoors. Of course the MVOCs in dust will not be representative of all MVOCs present since those on dust are in the “condensed phase” (non-gasesous) and what is found on dust will be skewed toward the less volatile compounds (those with the lowest vapor pressures).

Martin TÃ¤ubel of the Finnish National Institute of Health and Welfare reported on a study of microbial VOCs that was part of the European Commission’s HITEA project (“Health Effects of Indoor Pollutants”). The HITEA project’s aims include integrating microbial, toxicological and epidemiological approaches.

Taubel’s summarized the project’s results to date in his presentation at a symposium “Microbes, Indoor Environment and Health-Interdisciplinary challenges” at the Environment and Health: Bridging South, North, East and West, held in Basel Switzerland August 20-23. (The symposium was organized by this post’s author, Hal Levin, as part of his work on the microBEnet project funded by the Alfred P.Sloan Foundation’s Microbiology of the Built Environment Program.)

The HITEA project includes a study of 99 schools in Amsterdam, Barcelona, and Helsinki. In each country, at least 10 schools with and 10 schools without reported dampness, moisture damage, and/or visible mould were included from each country — the included schools were within a convenient geographical distance to the conducting study centers.

According to TÃ¤ubel, the results to date show the following:
– A big variety of partly highly bioactive secondary metabolites are produced by fungi and bacteria (>300 mycotoxins, ~15.000 bacterial compounds)
– ‘Toxigenic’ fungi and bacteria can grow on a variety of building materials and are part of the building associated microbiome. Their growth depends on conditions, e.g., substrate, water activity, temperature, other microbes, …) [this underscores the importance of collecting metadata on indoor environmental conditions when collecting microbial samples and on analyzing the communities, not just the individual compounds.]
– There is a “tendency towards a higher number of microbial secondary metabolites at higher concentrations in dust samples from moisture-damaged buildings
– There was an observed effect of the different seasons (early spring versus winter) when samples were collected on the prevalence of a number of metabolites indoors
– A related study (known as the PAMCHAR study — “Chemical and biological characterization of ambient air coarse, fine and ultrafine particles for human health risk assessment in Europe”) showed that microbial toxins are also present in outdoor air
– The results raise questions about the relevance of outdoor sources on the occurrence of microbial toxins indoors.

Conclusions from the TÃ¤ubel presentation:
– Microbial toxins are common findings in school buildings both with and without moisture damage
– Outdoor air particulate matter contains microbial toxins commonly found indoors
– A large variety of fungal and bacterial secondary metabolites are found in indoor dust at levels of nanograms/m2 sampled surface
– A higher number of toxins at elevated concentrations were found in school buildings with moisture damage
– No clear differences between buildings with and without moisture damage in single compounds; no single one toxin a good indicator for moisture damage /dampness in a building
– Indoor occurrence of microbial toxins is likely to be affected also by outdoor air, not only indoor sources
– There were geographical and seasonal differences, as with other microbial exposures
– An effort to investigate the health implications of the presence of MVOCs resulted in limited evidence of a health effect and questions as to whether there is actually any difference between the effects of exposure to MVOCs from outdoors and those from indoors. 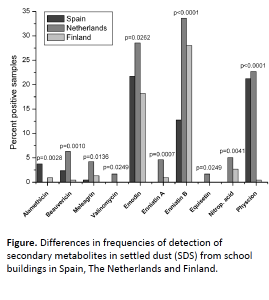 An extract from the paper’s “environmental impact” statement:
“A multitude of different microbial secondary metabolites, often referred to as ‘microbial toxins’, are part of the complex exposures encountered in indoor environments. This study shows that moisture damage and dampness observed in school buildings link to an increase in the number of different mycotoxins present at elevated levels in settled dust; however, it is evident that microbial toxins are also present in non-damaged buildings as part of the ‘normal’ microbial flora indoors. [see Figure above].This extensive study lays the groundwork for future attempts to measure indoor exposure to microbial toxins and to assess the health risks related to such exposure.” (Peitzsch et al, 2012 J. Environ Monit. )