The American Museum of Natural History just released a new short documentary that highlights built environment microbiology research. Actually the film is about antibiotic resistance evolution in Staphylococcus aureus, but the filmmakers also wanted to highlight the not-so-ominous interactions we have with the built environment microbiome every day. So they came out to Oregon to film a recent Biology and the Built Environment Center experiment.

We have recently been focused on understanding the human microbial cloud. We’ve known for a long time that bacteria can move from person to person through the air, but research in the past has always focused on sick people giving off pathogens. But we are actually sharing a diverse community of microbes from our individual human microbiomes – and different people give off individualized clouds! We’re still working on the study and we hope to have it published soon.

Thanks to Sandya Viswanatham and the great AMNH film crew! 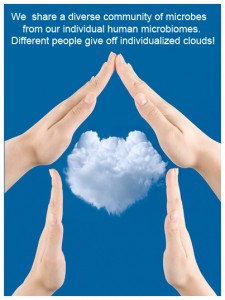