Health care associated infections (HAIs) also known as nosocomial infections  occurred in 4.5 out of every 100 hospital admissions in 2002 and contributed to 99,000 deaths (Klevens 2002). In the past many prevention strategies have focused on human based transmission (such as consistent hand washing) ignoring less obvious preventative measures such as those involving a facility’s design and operation. Due to numerous studies suggesting that setting and environmental conditions influence the mode of transmission in a disease outbreak, there is a growing belief that determining and implementing engineering control methods in the built environment of health care facilities could reduce the incidence of HAIs. The American Society for Healthcare Engineering recently published a monograph, The Environment of Care and Health Care-Associated Infections, An Engineering Perspective, which details airborne and surface transmissions, as well as strategies to manage and reduce HAIs in facility design and operation. The Hospital Microbiome Project, which was previously described on microBEnet by Brent Stephens, is attempting to study this problem by characterizing the taxonomic composition of microbial communities in two hospitals, studying surface, air, water and human associated microbes.

Impact of the Environment on Infections in Healthcare Facilities

Review of the Research Literature on Evidence-Based Healthcare Design 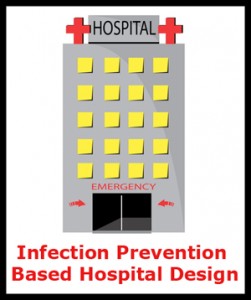 One thought on “Infection Prevention Based Hospital Design”