Skip to content
home Buildings, Information and Resources, Sloan MoBE Program, Urban Microbiomes Lessons learned: The microbes all around us and our buildings — and Jessica Green’s Nautilus article 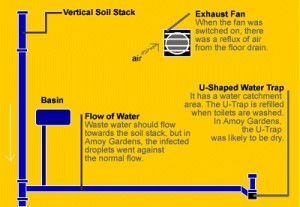 Illustration (from OpenScar.com) an explanation
of the beginning of the spread of SARS in Hong Kong’s Amoy Gardens apartment complex where the index case was in a building 60 meters away from a building where about 45% of the 300 infected individuals at Amoy Gardens lived.

Many of the other infected individuals also lived in buildings equidistant from the index case building. The spread started with a faulty plumbing installation, as shown in the diagram above as modified by residents’ bathroom cleaning practices, described at Open Scar, the web site for the illustration shown above. Wind conditions were also involved. The studies of the Amoy Gardens outbreak show how the building environment, occupant behavior, and the indoor microbiome can interact in ways that are difficult to imagine.

The article in Nautilus by Sloan Foundation grantee Jessica Green has a great illustration of the microbes swirling around outside of the building: click here to read the article and see the wonderful image of supersized microbes swirling around outside. This is not just drama under literary license, but it actually depicts an invisible reality that is an important part of many of the studies funded by the Alfred P. Sloan Foundation’s program, “Microbiology of the Built Environment.”

Some of the microbes within and around our buildings present serious threats to human health, and we need to understand them and their potential dissemination better. That understanding can lead to more effective control and reduce the negative consequences. Microbial survival, virulence and dissemination are strongly affected by the interaction between the microbes and the environment in the buildings where they are found. Some of the requisite understanding will emerge from collaboration between the microbial ecologists and the building scientists working on projects within and beyond those funded by the Sloan Foundation’s program.

Posted in the comments there on Green’s Nautilus article are several references to peer-reviewed literature that provide convincing evidence to support the reality behind the Nautilus article and the wonderful illustration too and the importance of the characteristics of the built environment to indoor microbiomes.

One of the references posted in the comments is to the study by Yuguo Li et al using computational fluid dynamics (CFD) to document the spread of the disease from the apartment visited by the index case to residents of other buildings 60 meters away — Li et al, “SARS spread from one building to another in Hong Kong shown using computational fluid dynamics: “Multi-zone modeling of probable SARS virus transmission by airflow between flats in Block E, Amoy Gardens” Indoor Air 2004; 15: 96—111. (If you are interested in open source CFD software, check out one site for it here.)

If you don’t think it could happen in your building, check out the references in Hal Levin’s comment on the Nautilus article.

Lessons learned: If you are studying the indoor microbiome, you should be aware of the ways the building and its indoor and surrounding environment and the occupants can influence the samples you are collecting.