This interesting article published in “CLEAN- Soil, Air, Water” (behind a paywall) in March 2013 aims to describe an efficient procedure for sampling airborne microbes and fungi in indoor environments. Airborne bacteria and spores commonly induce respiratory systems such as asthma and allergies, so they are an important component of the built environment. Gauzere et al used four different sampling devices (two of which were developed in their own lab) in three indoor environments–an open-plan office building, the Mona Lisa Room in the Louvre Museum and a storage room in the Decorative Arts Museum in Paris. The authors found that a cyclonic device developed by their own lab appeared to sample the airborne microbes most efficiently. This was intriguing, so I think it would be interesting for someone outside of the laboratory to use the same sampling techniques and devices and compare their results. 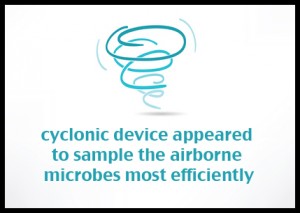 Sabreen Aulakh is a fourth-year undergraduate research assistant in Eisen lab. She is currently working on a microbial aquarium project, surveying microbes found in indoor aquariums on the UC Davis campus.

5 thoughts on “Sampling Airborne Microbes in the Built Environment”