Every time you bend over the public water fountain to take a drink and see the gunk at the bottom, do you wonder what’s living in it? Microbiologists do…

This 2013 study from Finland collaborated on a study examining biofilms on the drinking water distribution system in office buildings. They started sampling right as the building was finished and continued over the span of a year.

The researchers found that it was not the pipe material that caused microbial growth, as was previously thought. Rather, stagnation promoted biofilm growth because the microbes were able to leach lead from an area more efficiently when they were stationary and use it for growth. So changing the material in the pipes would not inhibit biofilm growth as much as just avoiding areas of pooling water in your water distribution system. Another result was that hot water led to less microbes than cold water.

Once the building was finished, there was a period of time where cold water in the pipes stayed stagnant until the building was fully operational. This is the standard procedure for most buildings during the interim between being built and being utilized. This paper concludes that before the water distribution system is used by people, the pipes should be flushed to decrease any microbial biofilms that started forming during the period of stagnation. 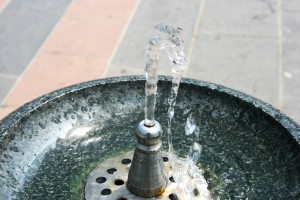