For anyone looking for another reason to fear hospitals, nosocomial infections (hospital acquired infections), or spinal injections, here is a story for you. Contaminated spinal injections were given to patients in 20 states and led to 751 individuals developing fungal meningitis and 64 deaths. FDA and CDC officials conducted a preliminary investigation and discovered a a compounding center in Massachusetts was responsible for the outbreak. The compounding center recalled all of their products in September of 2012 when the cause of the outbreak was discovered. Four fungal and 16 bacterial contaminants were found in the recalled vials.

Last Friday (8/22/14) researchers from the FDA published a paper, Genetic Characterization of Fungi Isolated from the Environmental Swabs collected from a Compounding Center Known to Cause Multistate Meningitis Outbreak in United States Using ITS Sequencing, in Pathogens (located here). In an effort to further investigate the multi-state fungal meningitis outbreak FDA researchers collected and analyzed 26 environmental swabs (microbes in the built environment!) from the compounding facility. Focusing on the ITS1 region of the rRNA gene for species identification, the researchers identified 14 additional fungal species. Many of the identified species have an ecological niche in moist and humid environments. Their presence can be considered an indicator of damp conditions which can occur due to roof leaks, or defective plumbing. 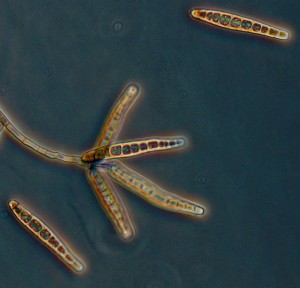