In this week’s Best of MicrobiomeDigest, we’ll look at the effect of a “sea voyage” on the human oral and belly button microbiome.

For those of you who are not familiar with Fisherman’s Friend (I am not sure if these are as popular in the rest of the world as they are in parts of Europe), it’s a British cough suppressant lozenge that is so strong that it will make your eyes water. They are famous for their TV commercials showing tough fishermen tearing up when they kissed their women goodbye or were homesick on their trip. To hide their emotions, the sailors would then pretend to be coughing and take an FF, while saying: “Strong stuff, that Fisherman’s Friend”. Here are links to one of their Dutch commercials (in English, sort of), and here is a US commercial. But I digress.

A paper that came out in Scientific Reports last week took a look at oral microbes in sailors, before and after their trips to sea. The times spent at sea varied from 105-150 days. The paper consistently calls those trips a “voyage”, making it sound much more glamorous than it probably was. The conditions of these expeditions are described in the paper as “a maritime climate with high temperatures and humidity” where “sailors suffer from dizziness, nausea and a series of physiological and psychological symptoms resulting in declined physical function”. Not your average cruise ship trip!

Swabs were taken from the oral mucosa (cheek swab) and belly button, and stored immediately in a freezer on board.  Specimens were analyzed using 16S rRNA gene amplification and sequencing, as well as whole genome analysis (WGA).

In the WGA metagenomic data of the oral samples, Streptococcus was the most abundant genus both before and after the journey, increasing from 79.7% to 96.7%. Several metabolic pathways, including foliate biosynthesis and amino acid synthesis pathways, were decreased after the expeditions. The sailors themselves were monitored as well. After their trip, they showed decreased serum haemoglobin and folic acid levels.

After I looked at this paper in more detail, I am not sure if it really deserves a “Best of MicrobiomeDigest” award. At first glance, it looked very cool because it studied a group of people all undergoing the same, large and prolonged perturbation. It is a microbiome researcher’s dream come true! But there are several unclarities and omissions that I had not expected to see in a Scientific Reports paper, and I wished that peer review would have taken some of these out. For example, is Table 1 showing the 16S rRNA or the WGA data? Is the data shown in Figure 1C the same as shown in 1A/B? and if so, why don’t some numbers not correspond between the 2 figures? In Figure S4, which panel is showing the oral samples?

Most importantly, I would have liked to see if the microbial communities of sailors on the same ship became more similar to each other after the trip. I imagine that staying on a ship for three months and sharing the same food, environmental conditions, and facilities would make the microbiomes of these sailors very similar to each other. This would have been a great opportunity to study that.

Maybe this would make a great summer student project: Download this data and see if the phylogenetic distance between these communities decreased after the trip. I will be happy to be a co-author!

In a somewhat related study, Seifried et al. in Wiley’s Microbiology Open describe the 16S rRNA gene-based bacterial composition in marine bioaerosol samples, during a cruise from the European North Sea to the Baltic Sea. This paper contains detailed descriptions of the location and sampling procedures, but I wish the microbial findings would have been presented in a more visually attractive way. There is also a duplication in the primer description in the Methods. 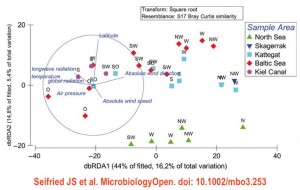 The microbial composition of the air-at-sea was characterized by an abundance of Proteobacteria (49% of all reads), followed by Bacteroidetes (23%) and Actinobacteria (16%). Genus Sphingomonas was the most abundant (17% of all sequencing reads). Surprisingly, the SAR11 clade (most abundant in seawater and containing cand. sp. Pelagibacter ubique), was only found at relatively low amounts in most samples

Combining these 2 studies reveals something puzzling: although Proteobacteria are very abundant in marine aerosols, and Firmicutes relatively rare, the sailors experienced a decrease in Proteobacteria and increase in Firmicutes after their sea-exposures. Of course, there are several caveats to be aware of when making that comparison (e.g., these studies were done in very different parts of the world), but it is interesting to hypothesize that exposure to marine aerosols is probably not the main driving factor in the shift in the microbial communities of sailors after a trip at sea.