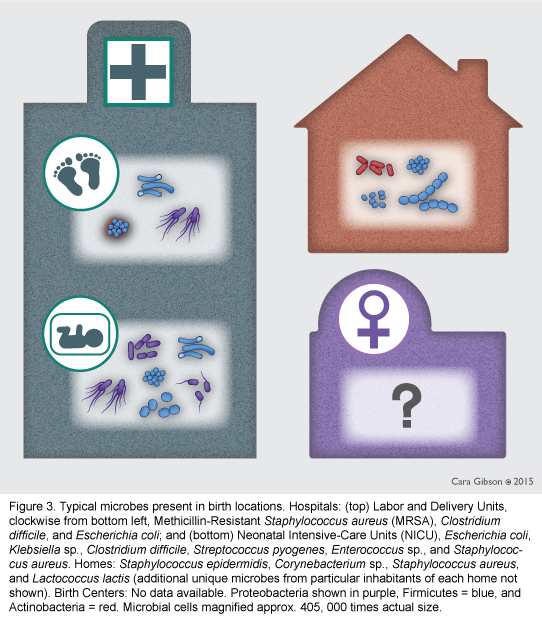 As the oldest daughter of 3rd generation HVAC/plumbing/electrical small business owners, I held my share of flashlights on service calls and even wrapped ductwork one summer. I loved fiddling and building with the different tools, left-over bits of copper tubing, and other miscellaneous tidbits from jobs.  But my heart was more into asking questions about living things, so I became a biologist. Now the intersection between the microbiomes of humans and their built structures such as homes, subways, schools, and hospitals intrigues me.

My recent guest post “The Healthy Birth: Dyad or Triad? Exploring Birth and the Microbiome”on Science and Sensibility, Lamaze International’s evidence-based blog about birth, includes the importance of the built microbiome. The post focuses on three major contributors to the infant microbiome: 1) birth mode (vaginal or Cesarean), 2) birth place (home, birth center, or hospital), and 3) first foods (breastfeeding or formula). The influence of different issues during pregnancy and birth interventions are also discussed.

Several questions surfaced for me while researching and writing this article that are relevant to the built microbiome. 1) Are babies born via Cesarean more likely to pick up environmentally acquired bacteria due to receiving fewer bacteria than vaginally delivered babies? 2) In hospitals where pathogens, such as Clostridium difficile and MRSA, are acquired during Cesarean deliveries does pathogen presence depend on carriage rates of patients in the hospital (or staff?) 3) Do free-standing birth centers, Cesarean only operating rooms, and mixed-used operating rooms have similar or different microbiomes? If anyone has done research on these and other relevant work that I’ve missed, please let me know through my website’s contact page.

One thought on “Birth: The intersection of biology and buildings”