It’s World Oceans Day, so I have included a couple of papers today about the anthropogenic influence on marine microbes. Other recent papers cover microbes in school dust, metabolites in houses with moisture damage, dental units, rust, and arsenic removal filters. Suggested song to play while reading this post: Jack Johnson — Only The Ocean 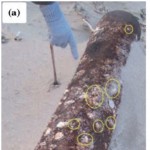 Floating anthropogenic litter provides habitat for a diverse community of marine organisms. A total of 387 taxa, including pro- and eukaryotic microorganisms, seaweeds and invertebrates, have been found rafting on floating litter in all major oceanic regions. … Micro-organisms are also ubiquitous on marine litter although the composition of the microbial community seems to depend on specific substratum characteristics such as the polymer type of floating plastic items. … Under the influence of currents and winds marine litter can transport associated organisms over extensive distances. Because of the great persistence (especially of plastics) and the vast quantities of litter in the world’s oceans, rafting dispersal has become more prevalent in the marine environment, potentially facilitating the spread of invasive species. 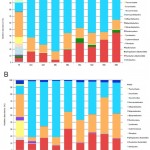 We studied the response of a Mediterranean bacterioplankton community to two anthropogenic perturbations (i.e., nutrient enrichment and/or acidification) in two mesocosm experiments (in winter and summer). Nutrient enrichment increased the relative abundance of some operational taxonomic units (OTUs), e.g. Polaribacter, Tenacibaculum, Rhodobacteraceae, and a relative decrease in others (e.g. Croceibacter). Interestingly, a synergistic effect of acidification and nutrient enrichment was observed on specific OTUs (e.g. SAR86). …Most of the abundant OTUs at the end of the experiments were abundant, or at least common, in the original community of both experiments, suggesting that ecosystem alterations do not necessarily call for rare members to grow. 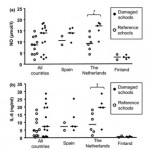 Aiming to identify factors causing the adverse health effects associated with moisture-damaged indoor environments, we analyzed immunotoxicological potential of settled dust from moisture-damaged and reference schools in relation to their microbiological composition. Mouse RAW264.7 macrophages were exposed to settled dust samples (n = 25) collected from moisture-damaged and reference schools in Spain, the Netherlands, and Finland. … Dust from moisture-damaged schools in Spain and the Netherlands induced stronger immunotoxicological responses compared to samples from reference schools; the responses to Finnish samples were generally lower with no difference between the schools. In multivariate analysis, IL-6 and apoptosis responses were most strongly associated with moisture status of the school. The measured responses correlated with several microbial markers and numbers of particles, but the most important predictor of the immunotoxicological potential of settled dust was muramic acid concentration, a marker of Gram-positive bacteria. 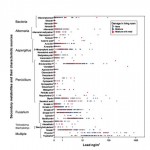 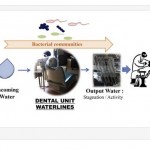 In this study, 454 high-throughput pyrosequencing was used to investigate the bacterial community in seven dental offices (N=7) and to identify potential bacterial pathogenic sequences. Dental unit waters (DUW) were collected from the tap water supplying units (Incoming Water; IW) to the output exposure point of the turbine handpiece (Output water; OW) following a stagnation period (OWS), and immediately after the last patient of the sampling day (OWA). A high bacterial diversity was revealed in DUW with 394 operational taxonomic units detected at the genus level…. Results showed that 96.7%, 96.8% and 97.4% of the total sequences from IW, OWS and OWA respectively were common to the 3 defined water groups, thereby highlighting a common core microbiome. ….The presence of potentially pathogenic genera was detected, including Pseudomonas and Legionella spp. Emerging and opportunistic pathogenic genera such as Mycobacterium, Propionibacterium and Stenotrophomonas were likewise recovered in DUW. 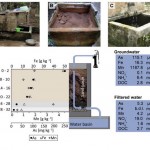 Household sand filters are used in rural areas of Vietnam to remove As, Fe, and Mn from groundwater for drinking water purposes. Currently, it is unknown what role microbial processes play in mineral oxide formation and As removal during water filtration. We performed most probable number counts to quantify the abundance of physiological groups of microorganisms capable of catalyzing Fe- and Mn-redox transformation processes in a household sand filter. ….(T)he microbial community on the sand filter was dominated by nitrifying microorganisms, e.g. Nitrospira, Nitrosomonadales, and an archaeal OTU affiliated to Candidatus Nitrososphaera….Based on our analysis of the microbial community composition and previous studies on the solid phase chemistry of sand filters we conclude that abiotic Fe(II) oxidation processes prevail over biotic Fe(II) oxidation on the filter.

The role of bacterial communities and carbon dioxide on the corrosion of steel –  K.M. Usher – Corrosion Science 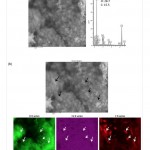 Natural microbial communities were grown anaerobically with steel as the electron source and CO2 the electron acceptor and carbon source, without organic carbon and typical electron acceptors. The cultures increased corrosion by up to 45.5% compared to sterile controls in two months. Pyrosequencing showed the presence of sulphate reducing bacteria (SRB), sulphur reducing bacteria (S0RB) and acetogens likely growing in a syntrophic relationship where SRB extracted electrons from iron, acetogens accepted electrons and reduced CO2 to acetate, which served as carbon source for SRB and/or S0RB. The SRB Desulfovibrio mexicanus comprised up to 90.1% of the community.

For lots of other recent microbiome and microbiology papers, visit my free MicrobiomeDigest blog.