What’s new in the built environment microbiology literature? Here is my selection of the new papers from the past 2 weeks. And, since one of them is about the microbiome of gyms, I thought “Pump It” by the Black Eyed Peas would fit nicely with this post. And I apologize that only two of these papers are Open Access. Dear microbiologists of the world, please make your papers accessible for all, by only publishing in the Open Access format! Thank you… Let’s start. 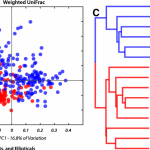 Bacterial assemblages associated with different surfaces in three athletic facilities, including floors, mats, benches, free weights, and elliptical handles, were sampled every other hour (8 am to 6 pm) for 2 days. Surface and equipment type had a stronger influence on bacterial community composition than the facility in which they were housed. Surfaces that were primarily in contact with human skin exhibited highly dynamic bacterial community composition and non-random co-occurrence patterns, suggesting that different host microbiomes–shaped by selective forces–were being deposited on these surfaces through time. However, bacterial assemblages found on the floors and mats changed less over time, and species co-occurrence patterns appeared random, suggesting more neutral community assembly. 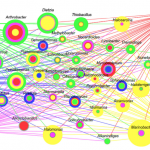 Nineteen oil-contaminated soil samples and five uncontaminated controls were taken from six major oilfields across different geoclimatic regions in China to investigate the spatial distribution of the microbial ecosystem. Microbial community analysis revealed remarkable variation in microbial diversity between oil-contaminated soils taken from different oilfields. Canonical correspondence analysis (CCA) further demonstrated that a suite of in situ geochemical parameters, including soil moisture and sulfate concentrations, were among the factors that influenced the overall microbial community structure and composition. ……Euryarchaeota may play an important ecological role in some oil-contaminated soils. 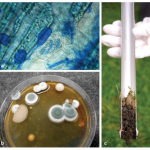 Microorganisms such as fungi and bacteria have been found to be diverse and abundant components of green roof growing substrate and may contribute to some of the other benefits green roofs provide such as the removal of organic pollutants from precipitation. Here, we review several functional groups of microbes that may be useful for understanding in terms of green roof design and maintenance: mycorrhizal fungi, decomposer fungi, endophytes, N-fixing bacteria, and pathogens. These microbes interact with plant species and growing substrate in complex ways that require further investigation. The ecology of these microbial groups should also be considered, including their dispersal rates and how they respond to regional differences such as climate and seasonality. 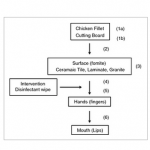 In the present study, we conducted a quantitative microbial risk assessment forecasting the exposure to Campylobacter jejuni contaminated surfaces during preparation of chicken fillets and how using a disinfectant-wipe intervention to clean a contaminated work area decreases the risk of infection following the preparation of raw chicken fillet in a domestic kitchen. Using a Monte Carlo simulation of the risk of transferring Camp. jejuni strain A3249, from various surfaces to hands and subsequently transferring it to the mouth was forecasted. The use of a disinfectant-wipe intervention to disinfect contaminated surface area was also assessed. Several assumptions were used as input parameters in the classical Beta-Poisson model to determine the risk of infection. The disinfectant-wipe intervention reduced the risk of Camp. jejuni infection by 2—3 orders on all fomites. 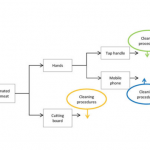 We report results from two surveys on Norwegian consumers’ cleaning procedures. Laboratory models involving cutting boards, tap handles and mobile phones contaminated with E. coli and S. aureus were used to compare the hygiene efficacy of commonly used cleaning methods together with new technologies (sprays, single use wipes, and chlorinebased disinfectants). Commonly used cleaning methods produced a mean log10 reduction (LR) in contamination of 1.5-2.5. The efficacy could be improved by drying or including a disinfection step (mean LR 3.1-4.6). Cleaning of mobile phones was common and was improved by including humidity (1.5-1.9 mean LR). In many situations, traditional methods used by consumers may be sufficient to hygienically clean surfaces. However, in some situations, such as where there are infected or immune compromised individuals, or where high risk foods are being handled, hygiene practices resulting in higher LR should be recommended.

Open Access:Prokaryotic Diversity in the Rhizosphere of Organic, Intensive, and Transitional Coffee Farms in Brazil – Adam Collins Caldwell – PLOS ONE 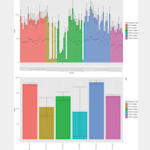 This study aimed to characterize and determine the differences in the prokaryotic soil microbiology of three Brazilian coffee farms: one practicing intensive farming, one practicing organic farming, and one undergoing a transition from intensive to organic practices. Soil samples were collected from 20 coffee plant rhizospheres (soil directly influenced by the plant root exudates) and 10 control sites (soil 5 m away from the coffee plantation) at each of the three farms for a total of 90 samples. Profiling of 16S rRNA gene V4 regions revealed high levels of prokaryotic diversity in all three farms, with thousands of species level operational taxonomic units identified in each farm. Additionally, a statistically significant difference was found between each farm’s coffee rhizosphere microbiome, as well as between coffee rhizosphere soils and control soils. ….many new groups may exist in these samples that can be further studied as potential plant growth-promoting bacteria to improve coffee production while diminishing negative environmental impacts.