I just saw this paper, published a couple of days ago in Nature’s Scientific Reports. And yeah, it’s open access! While reading this post, I would suggest playing Dalai Lama by Rammstein, the in-flight version of Der ErlkÃ¶nig.

Here is the abstract:

Human populations worldwide are increasingly confronted with infectious diseases and antimicrobial resistance spreading faster and appearing more frequently. Knowledge regarding their occurrence and worldwide transmission is important to control outbreaks and prevent epidemics. Here, we performed shotgun sequencing of toilet waste from 18 international airplanes arriving in Copenhagen, Denmark, from nine cities in three world regions. An average of 18.6â€‰Gb (14.8 to 25.7â€‰Gb) of raw Illumina paired end sequence data was generated, cleaned, trimmed and mapped against reference sequence databases for bacteria and antimicrobial resistance genes. An average of 106,839 (0.06%) reads were assigned to resistance genes with genes encoding resistance to tetracycline, macrolide and beta-lactam resistance genes as the most abundant in all samples. We found significantly higher abundance and diversity of genes encoding antimicrobial resistance, including critical important resistance (e.g. blaCTX-M) carried on airplanes from South Asia compared to North America. Presence of Salmonella enterica and norovirus were also detected in higher amounts from South Asia, whereas Clostridium difficile was most abundant in samples from North America. Our study provides a first step towards a potential novel strategy for global surveillance enabling simultaneous detection of multiple human health threatening genetic elements, infectious agents and resistance genes.

Mmm, it sounds a bit like “Big Brother is watching you” to me. But the science is cool. 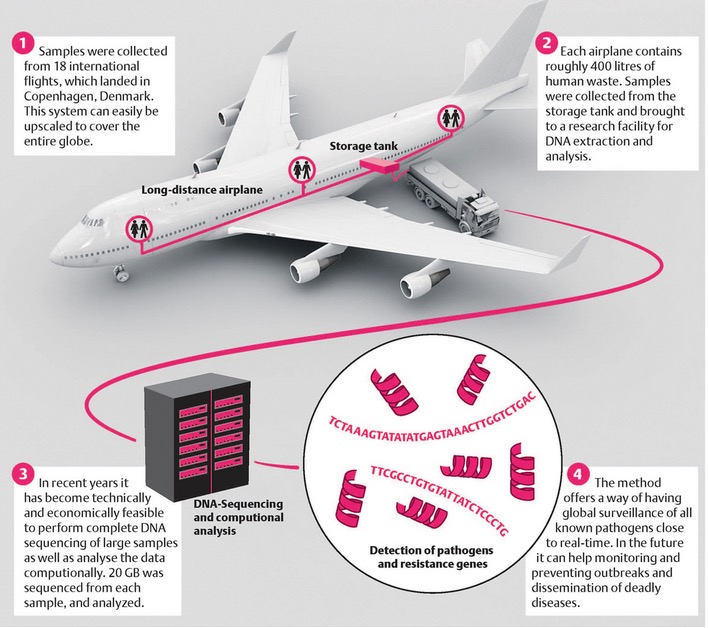 One thought on “Metagenomics of toilet waste from long distance flights”