This article on the website of Michigan Radio had an intriguing title.

This is a nice story illustrating how the detection of marker bacteria can be used to track contamination of rivers and other environments with fecal matter, and it would go nicely with this song from the Red Hot Chili Peppers – Especially In Michigan.

“Joan Rose is a professor in the Department of Fisheries and Wildlife at Michigan State University. She took samples from 64 rivers in Michigan and found that human sewage had leaked into several different watersheds.”

In this case, Escherichia coli and Bacteroides thetaiotaomicron were used as markers of contamination with human fecal matter. Joan Rose explains:

“We use a DNA, sort of like they do in the television show CSI,” she says. “We take a water sample, we take the bacteria, and we extract the DNA out of it.”

Rose and her team noticed that some samples had much higher contamination levels than in other samples. 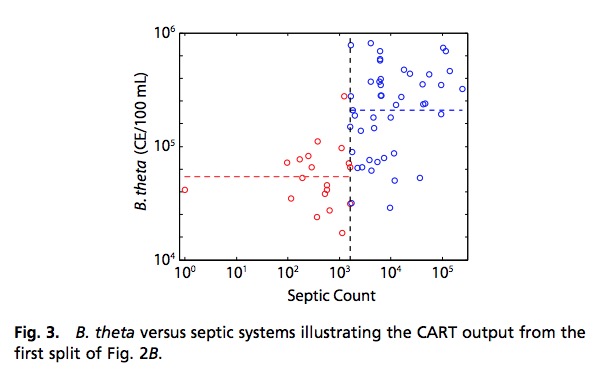 You can read the whole story or listen to the podcast here. The article does not link to the PNAS paper that explains the study in more detail, but here it is:

Linking fecal indicator bacteria concentrations in large mixed-use watersheds back to diffuse human sources, such as septic systems, has met limited success. In this study, 64 rivers that drain 84% of Michigan’s Lower Peninsula were sampled under baseflow conditions for Escherichia coli, Bacteroides thetaiotaomicron (a human source-tracking marker), landscape characteristics, and geochemical and hydrologic variables. E. coli and B. thetaiotaomicron were routinely detected in sampled rivers and an E. coli reference level was defined (1.4 log10 most probable numberâ‹…100 mLâˆ’1). Using classification and regression tree analysis and demographic estimates of wastewater treatments per watershed, septic systems seem to be the primary driver of fecal bacteria levels. In particular, watersheds with more than 1,621 septic systems exhibited significantly higher concentrations of B. thetaiotaomicron. This information is vital for evaluating water quality and health implications, determining the impacts of septic systems on watersheds, and improving management decisions for locating, constructing, and maintaining on-site wastewater treatment systems.