Here is your song to go with this post: Something in the water by Carrie Underwood.

When we drink tap water, we usually don’t really think about the bacteria that might be in there. The quality of drinking water in the US is regulated by Environmental Protection Agency (EPA) and monitored by regularly testing the water for the presence of chemicals and microorganisms. Most of these analyses focus on the quality of the water itself, but do not test the presence of microbes in biofilms on the distribution pipes of the drinking water distribution systems (DWDSs). Such studies would also be difficult, since that would involve digging up pipes and possibly contaminating the system with soil.

The ISME Journal just published a paper on biofilms in water meters: Core-satellite populations and seasonality of water meter biofilms in a metropolitan drinking water distribution system by Fangqiong Ling, Chiachi Hwang, Mark W LeChevallier, Gary L Andersen and Wen-Tso Liu. Water meters are a good model system to measure biofilm composition, because they are at the end of the DWDS, closest to a home. In addition, water meters are regularly replaced by new models, allowing for an easy way to access and sample the water system. 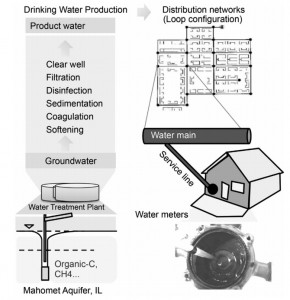 The authors studied water meters in the Illinois American Water system that were replaced after 15 years of use. Water meters were removed, and biofilms were collected with sterile cotton swabs. The paper did not explain from exactly which surface, and a diagram would have been helpful. In addition, “suspended communities” (I assume these are samples from free flowing drinking water) were collected. Water meter and suspension communities were each extracted using a different DNA extraction method. The reason for this was not well explained in the paper, and we have to keep this in mind when comparing the microbial populations of water meters and free-flowing water.

Biofilm communities showed lower species richness and diversity than the suspended communities. The authors defined core communities by focussing on OTUs “at 30% occupance”, a definition which I found to be unclear (present in 30% of samples? in 30% of reads?). The biofilm core consisted of obligate methanotrophs and methylotrophs, suggesting the presence of methane and methanol as an energy source. There was some overlap between the biofilm and free communities, but the description of the text and figures in part of the paper describing the core communities was not always clear. 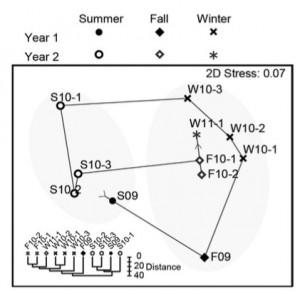 Variations in the microbial communities were not explained by age of the water line, disinfectant type or other water line characteristics. However, the season in which a sample was obtained was a strong determinant for the clustering of the biofilm populations. Some OTUs were found more often during the summer, such as Methylotenera, while two Comamonadaceae OTUs showed a higher abundance in the winter. The authors discuss that temperature is the most likely factor to drive the seasonal variation in these biofilm communities. The paper ends with a recommendation to monitor the biofilms in these DWDSs to detect contamination of lines with disease-causing agents, none of which appear to have been found in this study.

Overall, this was a mainly descriptive paper. I had hoped to find a bit more on the presence (or absence) of potential human pathogens, and the overlap between the biofilm and free-flowing drinking water communities. It was also not clear how thick these biofilms were, and if the thickness of the biofilm was associated with age or composition of the drinking water pipes. The seasonality of the biofilm composition is interesting. The Illinois DWDS studied in this paper receives groundwater, and seasonal fluctuations in mineral components or temperature might explain for the differences reported in this study.