Gearing up the UNITE database for the built mycobiome

The team behind the UNITE database for molecular identification of fungi has been granted support from the Sloan Foundation to strengthen the support for fungi from the built environment. Launched in 2001 as an ITS database for identification of ectomycorrhizal fungi in the Nordic countries, UNITE has since grown into a full-fledged sequence management environment covering all fungi at a global level. It mirrors GenBank and the INDSC and features all public fungal ITS sequences. UNITE supports and encourages third-party sequence annotation, and several annotation efforts have brought the data up to standards for, e.g., plant pathogenic fungi, mycorrhizal fungi, and various parts of the Dikarya. No annotation effort has however covered the mycobiome of the built environment in an explicit way.

The funding granted will be used for three overarching tasks:

Various other tasks, such as examining how commonly used pipelines and software environments can be improved to better account for the built mycobiome, will also be performed. To increase the interaction with researchers and research professionals in fields relating to the built environment, the UNITE team will attend and present our initiative at relevant conferences and meetings in these fields.

We will do our best to use the funding in a way conducive to molecular identification of building-related fungi. All our results will be open, free, and available to the scientific community at no delay. We similarly hope that the increased visibility of UNITE in building-related contexts will generate a momentum for community participation in the annotation and data sharing efforts. All contributions are most welcome. 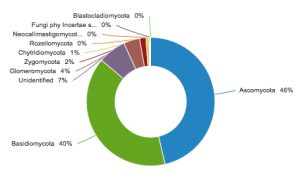