Here are some new papers of interest. 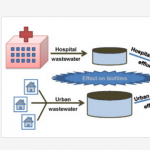 Hospital wastewaters (HWW) contain wider spectrum and higher quantity of pharmaceuticals than urban wastewaters (UWW), but they are generally discharged in sewers without pretreatment. Since traditional urban wastewater treatment plants (WWTP) are not designed to treat HWWs, treated effluents may still contain pollutants that could impair receiving aquatic environments. (…) This study evaluated the efficiency of biological treatment with conventional activated sludge system performed parallel on HWW and UWW. Furthermore, six successive monthly colonizations of biofilms were done on autoclaved stones, placed in grid-baskets in the hospital treated effluents (HTE) and urban treated effluents (UTE). The biomass of these biofilms as well as the structure and diversity of their bacterial communities were investigated.

This study was intended to characterize the perceived risks of urban agriculture by residents of four low-income neighborhoods in which the potential exists for further urban agriculture development and to provide data to support whether any chemical hazards and foodborne pathogens as potential food safety hazards were present. Sixty-seven residents participated in focus groups related to environmental health, food security, and urban gardening. In addition, soils from six locations were tested. (…) Soils were contaminated with lead (Pb), zinc, cadmium (Cd), and copper, but not arsenic or chromium. Results from our study suggest paint was the main source of soil contamination. (…) No foodborne pathogen targets were detected by PCR from any of the soils. Residents expressed the need for clearness regarding soil quality and gardening practices in their neighborhoods to consume food grown in these urban areas. 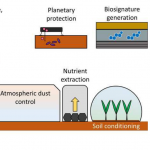 Geobiology, and in particular mineral-microbe interactions, has a significant role to play in current and future space exploration. This includes the search for biosignatures in extraterrestrial environments, and the human exploration of space. Microorganisms can be exploited to advance such exploration, such as through biomining, maintenance of life-support systems, and testing of life-detection instrumentation. In view of these potential applications, a European Space Agency (ESA) Topical Team “Geobiology in Space Exploration” was developed to explore these applications, and identify research avenues to be investigated to support this endeavour. Through community workshops, a roadmap was produced, with which to define future research directions via a set of 15 recommendations spanning three key areas: Science, Technology, and Community. 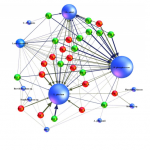 Beef burgers were stored at 4°C under vacuum in nisin-activated antimicrobial packaging. Microbial ecology analyses were performed from samples collected between days 0 to 21 of the storage to discover the population diversity. Two batches were analyzed using RNA-based DGGE and pyrosequencing. The active packaging retarded the growth of the total viable counts as well as lactic acid bacteria. Culture-independent analysis by pyrosequencing of RNA extracted directly from meat showed that Photobacterium phosphoreum, Lactococcus piscium, Lactobacillus sakei and Leuconostoc carnosum were the major OTUs shared between control and treated samples. Beta diversity analysis of the 16S rRNA sequences data and RNA-DGGE showed a clear separation between two batches based on the microbiota. (…) The present study aimed to study the viable bacterial communities in beef burgers stored in nisin-based antimicrobial packaging and highlights the efficacy of this strategy to prolong beef burgers shelf life. 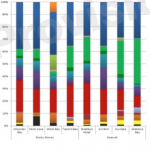 In this study, the bacterial communities of intertidal biofilms were compared between artificial structures (seawalls) and natural habitats (rocky shores) within Sydney Harbour. Plots were cleared on each type of habitat at 8 locations. After 3 weeks the newly formed biofilm was sampled and the 16S rRNA gene sequenced using the Illumina Miseq platform. To account for differences in orientation and substrate material between seawalls and rocky shores that might have influenced our survey, we also deployed recruitment blocks next to the habitats at all locations for 3 weeks and then sampled and sequenced their microbial communities. Intertidal bacterial community structure sampled from plots differed between seawalls and rocky shores, but when substrate material, age and orientation were kept constant (with recruitment blocks) then bacterial communities were similar in composition and structure among habitats.