Skip to content
home Buildings, Built Environment Topics, Research, Sequencing Who is in the operating room during c-section deliveries?

Infants born via c-section have a microbiome community composed mostly of skin bacteria [1-3], but the source of these skin bacteria is unknown. People quickly shed bacteria into their environment, leaving their own bacterial signature in a room within hours [4]. Do hospital operating rooms harbor skin bacteria that could colonize c-section delivered infants? A study published earlier this week by Shin et al. in Microbiome addresses this question.

Operating room samples were most similar to human skin bacteria, as compared to oral, fecal, and vaginal microbiome samples (Figure 1). All hospital samples were dominated by Staphylococcus and Corynebacterium, common human skin bacteria. Lamps had the highest abundance of these two skin bacteria, including live cells that could potentially be transmitted to infants if the lamp is moved. Microscopy revealed human skin flakes in operating room dust samples. Bacterial beta diversity showed microbiome communities clustering by hospital and even differences between two different operating rooms in one hospital. Alpha diversity did not vary between hospitals. These results suggest that there may be differences due to either occupants in an operating room or cleaning regimes. 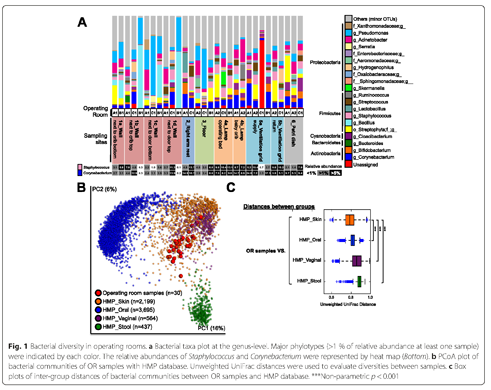 SourceTracker [5] results suggested that the skin microbiome of c-section delivered infants has bacteria obtained from the operating room. In contrast, the microbiome composition of vaginally-born infants is more similar to that of their mother’s vagina and gut microbiome. C-section infants are more likely to maintain a different microbiome than vaginally born infants throughout the first year [2, 3, 6] and perhaps even into adult hood [7]. Since C-section infants are also more likely to develop allergies, asthma, and digestive system disorders, understanding the source of the bacterial inoculum for C-section babies is important to determine. This paper is a first step towards understanding the potential role of the operating room in the colonization of infants during c-section delivery.

3 thoughts on “Who is in the operating room during c-section deliveries?”