What’s new in the intersection of microbiology and human use of the environment? Here are some recent papers and their abstracts.

The first paper is important because it describes the microbiological conditions of the waters that will be used in the 2016 Olympics: Environmental and Sanitary Conditions of Guanabara Bay, Rio de Janeiro – Giovana O. Fistarol – Frontiers in Microbiology 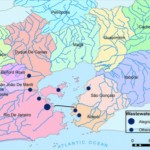 Herein we present an overview of the current environmental and sanitary conditions of Guanabara Bay, a consequence of all these decades of impacts. We will focus on microbial communities, how they may affect higher trophic levels of the aquatic community and also human health. The anthropogenic impacts in the bay are flagged by heavy eutrophication and by the emergence of pathogenic microorganisms that are either carried by domestic and/or hospital waste (e.g., virus, KPC-producing bacteria, and fecal coliforms), or that proliferate in such conditions (e.g., vibrios). (…) Although pollution of Guanabara Bay is not a recent problem, the hosting of the 2016 Olympic Games propelled the government to launch a series of plans to restore the bay’s water quality. If all plans are fully implemented, the restoration of Guanabara Bay and its shores may be one of the best legacies of the Olympic Games in Rio de Janeiro. 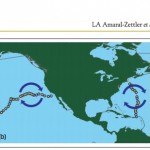 Microplastics (particles less than 5 mm) numerically dominate marine debris and occur from coastal waters to mid-ocean gyres, where surface circulation concentrates them.(…). Using next-generation DNA sequencing, we characterized bacterial communities from water and plastic samples from the North Pacific and North Atlantic subtropical gyres to determine whether the composition of different Plastisphere communities reflects their biogeographic origins. We found that these communities differed between ocean basins — and to a lesser extent between polymer types — and displayed latitudinal gradients in species richness. Our research reveals some of the impacts of microplastics on marine biodiversity, demonstrates that the effects and fate of PMD may vary considerably in different parts of the global ocean, and suggests that PMD mitigation will require regional management efforts. 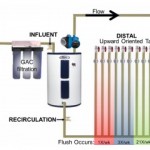 (…) Our objective was to conduct a controlled, replicated pilot-scale investigation to address this knowledge gap using continuously recirculating water heaters to examine five water heater set points (39—58 °C) under three water use conditions. We hypothesized that L. pneumophila levels at the tap depend on the collective influence of water heater temperature, flow frequency, and the resident plumbing ecology. (…) We confirmed temperature setting to be a critical factor in suppressing L. pneumophila growth both in continuously recirculating hot water lines and at distal taps. (…)Our study provides a new window of understanding into the microbial ecology of potable hot water systems and helps to resolve past discrepancies in the literature regarding the influence of water temperature and stagnation on L. pneumophila, which is the cause of a growing number of outbreaks. This work is especially timely, given society’s movement towards “green” buildings and the need to reconcile innovations in building design with public health. 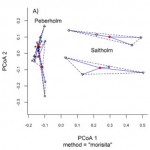 The study describes the primary assembly of arbuscular mycorrhizal communities on a newly constructed island Peberholm between Denmark and Sweden. The AM fungal community on Peberholm was compared with the neighboring natural island Saltholm. The structure of arbuscular mycorrhizal communities was assessed through 454 pyrosequencing. Internal community structure was investigated through fitting the rank-abundance of Operational Taxonomic Units to different models. Heterogeneity of communities within islands was assessed by analysis of group dispersion. The mean OTU richness per sample was significantly lower on the artificial island than on the neighboring natural island, indicating that richness of the colonizing AM fungal community is restricted by limited dispersal. The AM fungal communities colonizing the new island appeared to be a non-random subset of communities on the natural and much older neighboring island, which points to high colonization potential of certain — probably early successional — mycorrhizal fungi, likely assisted by migratory birds. 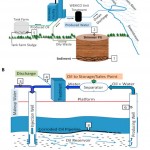 Microbial communities associated with corrosion in samples from Nigeria facilities were examined. The SRB, heterotrophic nitrate reducing bacteria activities and SRB and acid producing bacteria counts were higher in Escravos than those in Meren. The corrosion rates were also higher in the Escravos samples possessing higher capacity in methane production. Pyrosequencing surveys indicate that Escravos samples had high fractions of potential hydrocarbon degrading bacteria and methanogenic archaea (mainly Methanosaeta and Methanococcus). Microbial activities at Meren were dominated by bacteria (Marinobacterium, Halomonas, Pseudomonas and Kosmotoga spp.). The research was the first to analyze microbial community structures in the oil facilities investigated.