Here is a new set of papers that came out in the past week(s) that I posted at MicrobiomeDigest, but that I also wanted to share here. Three of these papers are from BMC’s Microbiome journal, which recently has published several other built environment microbiology papers, so it’s worth checking out. 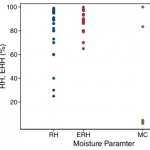 Uncontrolled excess moisture in buildings is a common problem that can lead to changes in fungal communities (…) A literature review was conducted specifically on moisture-induced fungal growth on gypsum drywall. This review revealed that there is no consistent measurement approach used to characterize moisture in laboratory and field studies, with relative humidity measurements being most common. (…) Several sources concur that surface moisture, particularly liquid water, is the prominent factor influencing microbial changes and that moisture in the air and within a material are of lesser importance. However, even if surface moisture is assessed, a single critical moisture level to prevent fungal growth cannot be defined, due to a number of factors, including variations in fungal genera and/or species, temperature, and nutrient availability. Despite these complexities, meaningful measurements can still be made to inform fungal growth by making localised, long-term, and continuous measurements of surface moisture. Such an approach will capture variations in a material’s surface moisture, which could provide insight on a number of conditions that could lead to fungal proliferation. 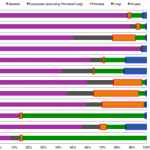 Reported here are the results of a viability-linked metagenomics assay, which (1) unveil a remarkably complex community profile for bacteria, fungi, and viruses and (2) bolster the detection of underrepresented taxa by eliminating biases resulting from extraneous DNA. This approach enabled, for the first time ever, the elucidation of viral genomes from a cleanroom environment. Upon comparing the viable biomes and distribution of phylotypes within a cleanroom and adjoining (uncontrolled) gowning enclosure, the rigorous cleaning and stringent control countermeasures of the former were observed to select for a greater presence of anaerobes and spore-forming microflora. Sequence abundance and correlation analyses suggest that the viable indoor microbiome is influenced by both the human microbiome and the surrounding ecosystem(s). 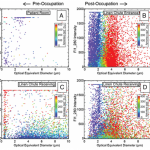 This survey used conventional optical particle counting which incorporated multi-channel fluorescence in conjunction with molecular phylogenetic analyses to characterize the bioaerosols liberated during soiled textile storage–immediately before and after the occupation of a modern hospital (…) The bioaerosol liberated during textile storage was characterized using Illumina MiSeq sequencing of bacterial 16S ribosomal ribonucleic acid (rRNA) genes. Gene copies recovered by quantitative PCR from aerosol collected in co-located impingers were consistent with fluorescence gated optical particle counting. The relative abundance patterns of proximal bacterial bioaerosol were such that the air in the origin and terminus of textile storage rooms could not be differentiated once the hospital began processing soiled linens. Genes from microbes typically associating with human skin, feces, and hair–Staphylococcus, Propionibacteria, Corynebacteria, Lactobacillus, and Streptococcus spp.–dominated the aerosol abundance profiles in textile holding rooms, which were generally far less diverse than communities recovered from surfaces in patient rooms. These results suggest that aerosol partitioning from the routine handling of soiled textiles can contribute to airborne exposures in the health care environment. 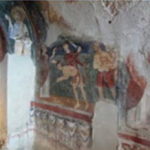 We investigated microorganisms dwelling on rocks, walls and paintings in two votive chapels built in grottoes in the Region of Campania, Italy (…) Color and distribution of biofilms in various areas of the grottoes were examined. Microbial components of biofilms were identified by light and electron microscopy and by molecular techniques (DNA analyses and Automatic rRNA Intergenic Spacer Analysis). Biofilms were also analyzed by X-ray diffraction to detect inorganic constituents deriving from rocks in the grottoes and walls of the churches and by X-ray fluorescence to detect the elements that made up the pigments of the mural paintings; optical cross sections were used to observe their relationships with substrata. Species of eubacteria, cyanobacteria and green algae were identified. Some of these species occurred in both grottoes, while others were exclusive to only one of the grottoes. The diversity of species, their common or exclusive occurrence in the grottoes, the relationships among microbial communities and the differences in color and distribution of biofilms were discussed on the basis of the different climatic factors affecting the two grottoes and the different inorganic components of substrata. 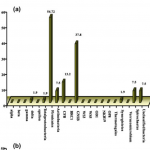 The effect of increasing the organic loading rates (OLRs) on the performance of the anaerobic codigestion of olive mill (OMW) and abattoir wastewaters (AW) was investigated under mesophilic and thermophilic conditions. The structure of the microbial community was also monitored. Increasing OLR to 9 g of chemical oxygen demand (COD) Lâˆ’1 dâˆ’1 affected significantly the biogas yield and microbial diversity at 35 °C. However, at 55 °C digester remained stable until OLR of 12 g of COD Lâˆ’1 dâˆ’1 with higher COD removal (80%) and biogas yield (0.52 L gâˆ’1 COD removed). Significant differences in the bacterial communities were detected between mesophilic and thermophilic conditions. The dominant phyla detected in the digester at both phases were the Firmicutes, Actinobacteria, Bacteroidetes, Synergistetes and Spirochaete. However, Verrucomicrobia, Proteobacteria and the candidate division BRC1 were only detected at thermophilic conditions. The Methanobacteriales and the Thermoplasmales were found as a high predominant archaeal member in the anaerobic sludge. 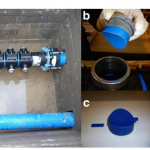 Biofilm formation in drinking water distribution systems (DWDS) is influenced by the source water, the supply infrastructure and the operation of the system (…) Biofilm coverage on pipes was evaluated by scanning electron microscopy (SEM) and confocal laser scanning microscopy (CLSM). The microbial community structure, bacteria and fungi, of water and biofilms was assessed using pyrosequencing. Conventional wisdom leads to an expectation for less microbial diversity in groundwater supplied systems. However, the analysis of bulk water showed higher microbial diversity in groundwater site samples compared with the surface water site. Conversely, higher diversity and richness were detected in biofilms from the surface water site(…) Thus, the unexpected result of an exceptionally low diversity with few dominant genera (Pseudomonas and Basidiobolus) in groundwater biofilm samples, despite the more diverse community in the bulk water, is attributed to the low-flow hydraulic conditions. This finding evidences that the local environmental conditions are shaping biofilm formation, composition and amount, and hence managing these is critical for the best operation of DWDS to safeguard water quality. 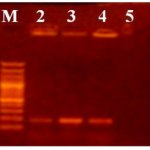 Microbial contamination of pharmaceuticals poses a great problem to the pharmaceutical manufacturing process, especially from a medical as well as an economic point of view. Depending upon the product and its intended use, the identification of isolates should not merely be limited to the United States Pharmacopeia (USP) indicator organisms. Eighty-five pre-used non-sterile pharmaceuticals collected from random consumers in Egypt were examined for the eventual presence of bacterial contaminants. Forty-one bacterial contaminants were isolated from 31 of the tested preparations. (…) Using molecular methods, 24 isolates (58.5 %) were successfully identified to the species level. Moreover, polymerase chain reaction (PCR) assays were compared to standard biochemical methods in the detection of pharmacopoeial bacterial indicators in artificially-contaminated pharmaceutical samples. PCR-based methods proved to be superior regarding speed, cost-effectiveness and sensitivity. Therefore, pharmaceutical manufacturers would be advised to adopt PCR-based methods in the microbiological quality testing of pharmaceuticals in the future.