Happy New Year to you all! Here are some interesting new papers that I found over the holidays. 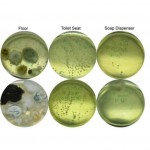 An increasing proportion of humanity lives in urban environments where they spend most of their lives indoors. Recent molecular studies have shown that bacterial assemblages in built environments (BEs) are extremely diverse, but BE fungal diversity remains poorly understood. We applied culture-independent methods based on next-generation sequencing (NGS) of the fungal internal transcribed spacer (ITS) to investigate the diversity and temporal dynamics of fungi in restrooms. Swab samples were collected weekly from three different surfaces in two public restrooms (male and female) in San Diego, CA, U.S.A. over an 8-week period. DNA amplification and culturing methods both found that the floor samples had significantly higher fungal loads than other surfaces. NGS sequencing of floor fungal assemblages identified a total of 2550 unique phylotypes (~800 per sample), less than half of which were identifiable. Of the known fungi, the majority came from environmental sources and we found little evidence of known human skin fungi. Fungal assemblages reformed rapidly in a highly consistent manner and the variance in the species diversity among samples was low. Overall, our study contributes to a better understanding of public restroom floor fungal communities. 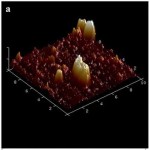 An air-cleaning device powered by electrokinetic propulsion has been adapted to provide a universal method for collecting samples of the aerobiome. (…) Performance was compared with the same reference filter method in field studies in three different environments. For 23 common fungal species by quantitative polymerase chain reaction (qPCR), there was 100 % sensitivity and apparent specificity of 87 %, with the reference filter taken as “gold standard.” Further, bacterial analysis of 16S RNA by amplicon sequencing showed equivalent community structure captured by the electrokinetic device and the reference filter. Unlike other current air sampling methods, capture of particles is determined by charge and so is not controlled by particle mass. We analyzed particle sizes captured from air, without regard to specific analyte by atomic force microscopy: particles at least as low as 100 nM could be captured from ambient air. 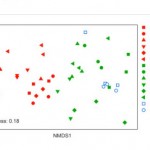 (…) Here, we used high-throughput quantitative PCR and terminal restriction fragment length polymorphism techniques to compare the diversity, abundance and composition of a broad-spectrum of ARGs and total bacteria in 12 urban parks with and without RWI in Victoria, Australia. A total of 40 unique ARGs were detected across all park soils, with genes conferring resistance to Î²-lactam being the most prevalent ARG type. The total numbers and the fold changes of the detected ARGs were significantly increased by RWI, and marked shifts in ARG patterns were also observed in urban parks with RWI compared to those without RWI. The changes in ARG patterns were paralleled by a significant effect of RWI on the bacterial community structure and a co-occurrence pattern of the detected ARG types. (…) Taken together, our findings suggested that irrigation of urban parks with reclaimed water could influence the abundance, diversity, and compositions of a wide variety of soil ARGs of clinical relevance. 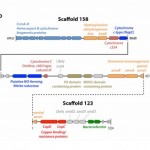 We report metagenomic evidence for the presence of a Nitrospira-like organism with the metabolic potential to perform the complete oxidation of ammonia to nitrate (i.e., it is a complete ammonia oxidizer [comammox]) in a drinking water system. This metagenome bin was discovered through shotgun DNA sequencing of samples from biologically active filters at the drinking water treatment plant in Ann Arbor, MI. Ribosomal proteins, 16S rRNA, and nxrA gene analyses confirmed that this genome is related to Nitrospira-like nitrite-oxidizing bacteria. The presence of the full suite of ammonia oxidation genes, including ammonia monooxygenase and hydroxylamine dehydrogenase, on a single ungapped scaffold within this metagenome bin suggests the presence of recently discovered comammox potential. Evaluations based on coverage and k-mer frequency distribution, use of two different genome-binning approaches, and nucleic acid and protein similarity analyses support the presence of this scaffold within the Nitrospira metagenome bin. 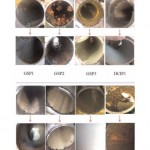 Pipes in the DWDS serving City S, located in eastern China, were sampled to analyze the concentration and distribution of pollutants in pipe-scale of pipes of different materials, ages and diameters, and the factors (such as materials, age, and diameter) influencing the accumulation of pollutants were also investigated. (…) The morphology and composition of pipe-scale were substantially influenced by pipe material and age. (…) In addition to hydrocarbons produced by microbial metabolism, there were microalgae metabolites and exogenous contaminants such as polycyclic aromatic hydrocarbons (PAHs). The concentrations of microbial metabolites increased with increasing service time. 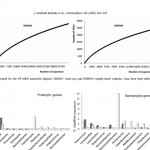 The bacterial diversity of a full scale MSW anaerobic reactor located in Madrid (Spain) was investigated using high-throughput 454 pyrosequencing. Even though the proteolytic bacteria prevailed throughout all of the process, community shifts were observed from the start-up to the steady-state conditions, with an increasing biodiversity displayed over time. The Bacteroidetes and the Firmicutes were the majority phyla: 55.1 and 40.2% (start-up) and 18.7 and 78.7 (steady-state) of the total reads. (…) The 454 pyrosequencing revealed a great diversity of rare organisms which seemingly do not sustain any metabolic roles in the course of the OF-MSW degradation. However, this scarce and unique microbiota can confer great resilience to the system as a buffer against nutritional and environmental changing conditions, thus opening the door to increase the current knowledge about the bacterial community dynamics taking place during MSW treatment processes.