Your weekly update of the literature on microbes of the built environment sensu lato. 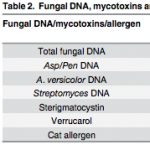 There are few studies on rhinitis and sick building syndrome (SBS) among students in tropical countries. We studied associations between levels of five fungal DNA sequences, two mycotoxins (sterigmatocystin and verrucarol) and cat allergen (Fel d 1) levels in schools and rhinitis and other weekly SBS symptoms in the students. Fungal DNA was measured by quantitative PCR and cat allergen by ELISA. (…)  In conclusion, total fungal contamination, measured as total fungal DNA) in the classrooms, Aspergillus versicolor and verrucarol can be risk factors for rhinitis and SBS symptoms among students in the tropical country Malaysia. 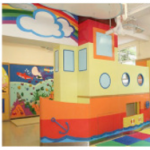 (…) To investigate the association between children’s health risks and the distribution and concentration of bacteria in particulate matter smaller than 2.5 Î¼m in indoor and outdoor air at three kindergartens in Hong Kong, quantitative polymerase chain reaction was used to determine the concentration of bacteria, and the terminal restriction fragment length polymorphism method targeting 16S ribosomal RNA genes was used to predict the phylogenetic airborne bacterial community structures. The bacterial concentrations indoors were higher than those outdoors in the three kindergartens, but no obvious differences were found (P > 0.05). Statistical analysis showed that the different schools had significantly different concentrations (P < 0.05). The abundance of bacteria in schools downtown (in Kowloon) was the greatest, reaching 3.3 Ã— 103 to 4.95 Ã— 104 cells per m3. However, the results showed no significant differences between the microbial populations obtained indoors and those obtained outdoors. (…) 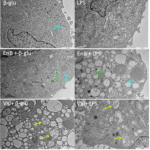 Indoor exposure to microbes and their structural and metabolic compounds is notoriously complex. In order to study proinflammatory interactions between the multiple microbial agents, macrophages derived from human THP-1 monocytic cells were exposed to several concentrations of microbial toxins alone (emodin, enniatin B, physcion, sterigmatocystin, valinomycin) and in combination with microbial structural components (bacterial lipopolysaccharide [LPS] or fungal Î²-glucan). (…)  The results demonstrate that microbial toxins together with bacterial and fungal structural components characteristic to moisture-damaged buildings can have drastic synergistic pro-inflammatory interactions at low exposure levels. 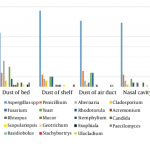 (…) The aim of this study was to determine the presence and relative abundance of fungal flora in the nasal cavity and bedroom of healthy subjects in Mashhad city, north east of Iran. A group of fifty healthy volunteers without a history of respiratory system diseases were selected. Samples from the nasal cavity and different parts of the bedroom including indoor air, pillow, mattress, blanket, dust of the bed, dust of the shelf and dust of the air duct were collected and cultured. The fungi were identified by standard mycological techniques. The most common fungi isolated from all samples were Aspergillus, Penicillium, Yeast, Alternaria and Cladosporium. Stemphylium, Ulocladium, Stachybotrys, Basidiobolus and Exophiala showed the least frequencies among the isolated fungi. 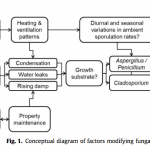 The aim of this study was to determine the accuracy of monoclonal antibodies (mAbs) in identifying culturable allergenic fungi present in visible mould growth in energy efficient homes, and to identify risk factors for exposure to these known allergenic fungi. Swabs were taken from fungal contaminated surfaces and culturable yeasts and moulds isolated by using mycological culture. Soluble antigens from cultures were tested by ELISA using mAbs specific to the culturable allergenic fungi  (…). Property type and energy efficiency levels were found to moderate the risk of indoor surfaces becoming contaminated with Aspergillus/Penicillium and Cladosporium which in turn was modified by the presence of condensation, water ingress and rising damp, consistent with previous literature. 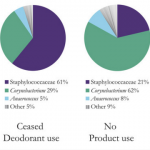 (…) Here we experimentally manipulate product use to examine the abundance, species richness, and composition of bacterial communities that recolonize the armpits of people with different product use habits. In doing so, we find that when deodorant and antiperspirant use were stopped, culturable bacterial density increased and approached that found on individuals who regularly do not use any product. In addition, when antiperspirants were subsequently applied, bacterial density dramatically declined. (…) In addition, individuals who used antiperspirants or deodorants long-term, but who stopped using product for two or more days as part of this study, had armpit communities dominated by Staphylococcaceae, whereas those of individuals in our study who habitually used no products were dominated by Corynebacterium. 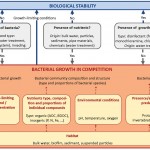 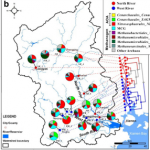 (…) Here, we investigated planktonic and benthic archaeal communities in a human-perturbed watershed (Jiulong River Watershed, JRW) of southeast China by using Illumina 16S ribosomal RNA gene amplicon sequencing. (…) Multivariate statistical analyses revealed that the variation of Î±-diversity of planktonic archaeal community was best explained by water temperature, whereas nutrient concentrations and stoichiometry were the significant drivers of Î²-diversity of planktonic and benthic communities. Taken together, these results demonstrate that the structure of archaeal communities in the JRW is sensitive to anthropogenic disturbances caused by riparian human activities. 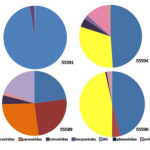 Red foxes (Vulpes vulpes) are the most abundant carnivore species in the Northern Hemisphere. Since their populations are well established in peri-urban and urban areas, they represent a potential reservoir of viruses that transmit from wildlife to humans or domestic animals. In this study, we evaluated the faecal virome of juvenile and adult foxes from peri-urban areas in central Croatia. The dominating mammalian viruses were fox picobirnavirus and parvovirus. The highest number of viral reads (N = 1412) was attributed to a new fox circovirus and complete viral genome was de novo assembled from the high-throughput sequencing data. Fox circovirus is highly similar to dog circoviruses identified in diseased dogs in USA and Italy, and to a recently discovered circovirus of foxes with neurologic disease from the United Kingdom. Our fox picobirnavirus was more closely related to the porcine and human picobirnaviruses than to known fox picobirnaviruses. 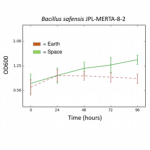 While significant attention has been paid to the potential risk of pathogenic microbes aboard crewed spacecraft, much less has focused on the non-pathogenic microbes in these habitats. (…) Here we report results of sending 48 bacterial strains, collected from built environments on earth, for a growth experiment on the ISS. (…) Of the 48 strains sent to the ISS, 45 of them showed similar growth in space and on earth. The vast majority of species tested in this experiment have also been found in culture-independent surveys of the ISS. Only one bacterial strain that avoided contamination showed significantly different growth in space. Bacillus safensis JPL-MERTA-8-2 grew 60% better in space than on earth. Conclusions: The majority of bacteria tested were not affected by conditions aboard the ISS in this experiment (e.g., microgravity, cosmic radiation). Further work on Bacillus safensis could lead to interesting insights on why this bacteria grew so much better in space. 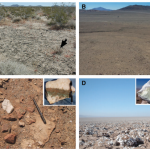 The evolution of habitable conditions on Mars is often tied to the existence of aquatic habitats and largely constrained to the first billion years of the planet. Here, we propose an alternate, lasting evolutionary trajectory that assumes the colonization of land habitats before the end of the Hesperian period (ca. 3 billion years ago) at a pace similar to life on Earth. Based on the ecological adaptations to increasing dryness observed in dryland ecosystems on Earth, we reconstruct the most likely sequence of events leading to a late extinction of land communities on Mars. We propose a trend of ecological change with increasing dryness from widespread edaphic communities to localized lithic communities and finally to communities exclusively found in hygroscopic substrates, reflecting the need for organisms to maximize access to atmospheric sources of water. If our thought process is correct, it implies the possibility of life on Mars until relatively recent times, perhaps even the present.