*This blog post highlights the backstory to my student’s project, which you can find here, on experiment.com.

Discoveries in science can come from unexpected sources

I became a scientist because my undergraduate mentor allowed me the opportunity to make my own discoveries.  While a young student at Swarthmore College, my then mentor Rachel Merz gave me the gift of scientific exploration — to learn something new about the world, to peek into that black box of nature and make a novel realization about the life around us — and it is a gift I have cherished ever since.  In an effort to pay it forward I incorporate discovery and project based learning in my courses and when mentoring undergraduates in the laboratory.  Undergraduate students are a special breed — they are naive, and come into a project without the burden of dogma, of knowledge of previous experiments and published literature, without a preconceived notion of how their experiments should turn out.  Sometimes this results in dramatic, fantastic failures — students who are unable to comprehend their experimental design because they are missing a deeper understanding of the methods they use.  Often, though, it results in amazing insights.  Liberated by notions of how things should be, undergraduate students are often able to see things how they truly are.  This story begins with one such student: Zachary Rokop, one of the most talented undergrads I have mentored at Indiana University.

I became drawn to the honey bee and its associated microbes while I was a faculty member at Wellesley College in 2010.  Over lunch, Heather Mattila (a honey bee behaviorist) told me about how bees collect nectar and pollen from plants, how they process it in the hive, and how little, at the time, was known about the microbes potentially associated with this process.  The honey bee is host to a microbial community, including a set of characteristic bacterial groups that are specific to the bee (see schematic below). 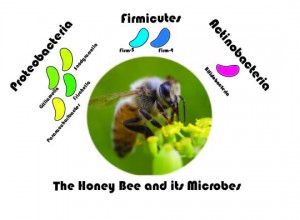 These bacteria are active in the honey bee gut (that is, they transcribe RNA) and some appear to be involved in metabolism of honey bee foods, such as nectar and pollen.  When I moved to Indiana University, I took this budding project with me, and that was where I met Zachary Rokop, an undergraduate student clearly drawn to the charismatic honey bee, who asked to join the lab.  Zach was interested in how these microbes may be transmitted between hive environments.  He designed an experiment to test for the presence of the same microbe within these habitats, in the hopes of identifying habitats that 1) may frequently exchange microbes and/or 2) may select for similar microbes.   His work led us to consider succession in these environments; how the presence of particular bacteria may influence the ability of others to colonize.  Specifically, he found that something secreted by Fructobacillus, a bacterium that is found in nectar and pollen, promotes the growth of the honey bee core microbes in vitro (Figure 1). 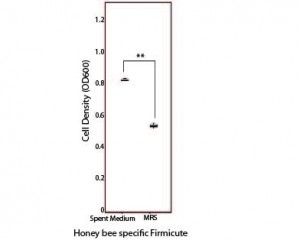 Figure 1. Honey bee specific bacteria (in this case, a Firmicute species) proliferate to greater numbers in vitro when grown in the presence of spent medium from Fructobacillus.

Zach wondered: “What could Fructobacillus be secreting that would alter the growth of other bacteria?” Thinking about microbes interacting with each other, in different environments, led us to think about metabolism, about syntrophic consortia, and this line of questioning launched the laboratory into an entirely new area of research: quorum sensing.

Microbes found within the honey bee are communicating with each other

One class of molecules that is secreted by microbes and that is known to affect community dynamics is autoinducers.  Although they come in different flavors, these chemical signals act as a kind of bacterial communication – a way that microbes are able to sense their density in an environment and respond with changes in behavior (such as motility, biofilm formation, metabolism, and virulence).  Some autoinducers are species specific but one particular autoinducer (so-called AI-2) is produced and sensed by a large swathe of microbes, from Gram positives to Gram

negatives, from Firmicutes to Proteobacteria.  It turns out that the honey bee microbes are producing this molecule in vivo (Figure 2).  The social honey bee, as it turns out, is home to a social microbial community.

Figure 2. Production of the autoinducer AI-2 within the honey bee gut as detected by a Vibrio harveyi biosensor.  Whole extracts from honey bee guts (in pink) were used in the autoinducer bioluminescence assay to detect AI-2 and compared to negative (TL26) and positive (BB170, BB721) controls.

Identifying who is talking and what they are saying, crowdsourcing a student’s project

Now that we know that the microbial community within the honey bee is coordinating behaviors, we are so excited about exploring the system further.  There are so many questions you can ask about this system: Do all the honey bee specific microbes participate in AI-2 based quorum sensing? What behaviors are controlled by quorum sensing? How does the presence of AI-2 alter the function of these microbes in vitro and in vivo? Since we have cultures in the lab for each of the major groups found in the bee, we are systematically identifying AI-2 production by each of these groups and dissecting their influence on important behaviors, such as biofilm formation.  This project is led by a dynamic duo: my graduate student Kayla Miller and her undergraduate mentee Carly Franklin.  To find out more about this project, read our experiment.com page, consider supporting our crowdsourcing, and contact us by email (irnewton (at) indiana.edu).

One thought on “The social microbiome of the social honey bee”