Could the trails of microbes we leave behind be used to solve crimes? Julian Smith picks up the scent. (…) Like our hapless suspect, we all leave traces of our microbes behind. We are haloed by an invisible nebula of bacteria, fungi and viruses. It’s inevitable that this gets transferred onto the things we touch, the people we meet, even the air we pass through. It’s our vaporous calling card. Recently we have started learning to unravel its message, and the results look set to change forensic science and policing for good. 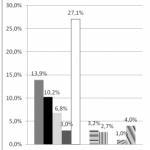 Microbes in air and space 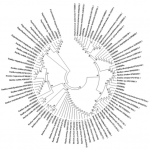 Greater Mexico City is one of the largest urban centers in the world, with an estimated population by 2010 of more than 20 million inhabitants. In urban areas like this, biological material is present at all atmospheric levels including live bacteria. We sampled the low atmosphere in several surveys at different points by the gravity method on LB and blood agar media during winter, spring, summer, and autumn seasons in the years 2008, 2010, 2011, and 2012. (…) Genomic DNA was extracted and convenient V3 hypervariable region libraries of 16S rDNA gene were high-throughput sequenced. (…) From this study, we conclude that it is possible to detect live airborne nonspore-forming bacteria in the low atmosphere of GMC, associated to the microbial cloud of its inhabitants. 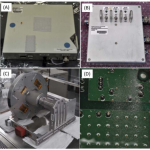 As a part of a series of studies regarding the microbial biota in manned space environments, we isolated fungi from six pieces of equipment recovered from the Japanese Experimental Module “KIBO” of the International Space Station (ISS) and from a Space Shuttle. Thirty-seven strains of fungi were isolated and identified, and were investigated with regard to morphological phenotypes and antifungal susceptibilities. (…) The morphological phenotypes and antifungal susceptibilities of the strains isolated from space environments were not significantly different from those of reference strains on Earth.

Microbes on the farm 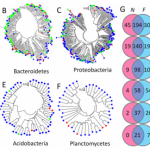 Agricultural activities inevitably result in anthropogenic interference with natural habitats. The diet and the gut microbiota of farmland wildlife can be altered due to the changes in food webs within agricultural ecosystems. In this work, we compared the diet and intestinal microbiota of the frog Fejervarya limnocharis in natural and farmland habitats in order to understand how custom farming affects the health of in vivo microbial ecosystems.(…)  The microbial composition, and particularly the composition of dominant microbes living in intestines, indicated that the land use practices might be one of factors affecting the gut microbial community composition. (…)  This study indicates that anthropogenic activities, such as the custom farming, have not only affected the food resources of frogs, but also influenced the health and in vivo microbial ecosystem of wildlife. 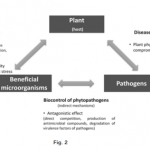 Plants naturally harbours a complex microbial ecosystem or plant microbiome, as neutral, beneficial or pathogens microorganisms, that are in a close interaction with the plant. The balance of these interactions is a key element for plant health, plant growth and productivity although several factors as ecological and environmental factors represents important drivers of the microorganism’s community. Herein, a review on plant microbiome is presented, and the case study of Vitis vinifera (grapevine) is presented as an example of the application of the study of a woody plant microbiome. Overall, new ecologically and sustainable strategies for agriculture are needed. The exploitation of the natural microbiome associated with plants and the identification of novel potential strains with plant benefits and biocontrol potential represent a challenge and a technological development for crops protection. 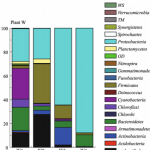 This study employed 454-pyrosequencing to investigate microbial and pathogenic communities in two wastewater reclamation and distribution systems.  (…)Human opportunistic pathogens, including Clostridium, Escherichia, Shigella, Pseudomonas and Mycobacterium, were selected and enriched by disinfection processes. The total chlorine and nutrients (TOC, NH3-N and NO3-N) significantly affected the microbial and pathogenic communities during reclaimed water storage and distribution processes. Our results indicated that the disinfectant-resistant pathogens should be controlled in reclaimed water, since the increases in relative abundances of pathogenic bacteria after disinfection implicate the potential public health associated with reclaimed water.

A bacterium that degrades and assimilates poly(ethylene terephthalate) – Shosuke Yoshida – Science ($: not sure, subscription required) 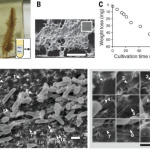 Poly(ethylene terephthalate) (PET) is used extensively worldwide in plastic products, and its accumulation in the environment has become a global concern. Because the ability to enzymatically degrade PET has been thought to be limited to a few fungal species, biodegradation is not yet a viable remediation or recycling strategy. By screening natural microbial communities exposed to PET in the environment, we isolated a novel bacterium, Ideonella sakaiensis 201-F6, that is able to use PET as its major energy and carbon source. When grown on PET, this strain produces two enzymes capable of hydrolyzing PET and the reaction intermediate, mono(2-hydroxyethyl) terephthalic acid. Both enzymes are required to enzymatically convert PET efficiently into its two environmentally benign monomers, terephthalic acid and ethylene glycol.

Heavy metal pollution is a principle source of environmental contamination. Epidemiological and animal data suggest that early-life lead (Pb) exposure results in critical effects on epigenetic gene regulation and child and adult weight trajectories. Using a mouse model of human-relevant exposure, we investigated the effects of perinatal Pb exposure on gut microbiota in adult mice and the link between gut microbiota and bodyweight changes. (…) Thus, perinatal Pb exposure results in altered adult gut microbiota regardless of sex and these changes are highly correlated with increased bodyweight in males. Adult gut microbiota can be shaped by early exposures and may contribute to disease risks in a sex-specific manner. 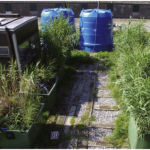 This study assessed the performance and diversity of microbial communities in multi-stage sub-surface flow constructed wetland systems (CWs). Our aim was to assess the impact of configuration on treatment performance and microbial diversity in the systems. (…) Microbial analysis showed an increased bacterial diversity in stage four compared to the first stage. These results indicate that the design and configuration of multi-stage constructed wetland systems may have an impact on the treatment performance and the composition of the microbial community in the systems, and such knowledge can be used to improve their design and performance. 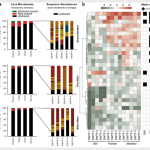 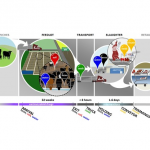 Antimicrobial resistant determinants (ARDs) can be transmitted from livestock systems through meat products or environmental effluents. The public health risk posed by these two routes is not well understood, particularly in non-pathogenic bacteria. We collected pooled samples from 8 groups of 1741 commercial cattle as they moved through the process of beef production from feedlot entry through slaughter. We recorded antimicrobial drug exposures and interrogated the resistome at points in production when management procedures could potentially influence ARD abundance and/or transmission. Over 300 unique ARDs were identified. Resistome diversity decreased while cattle were in the feedlot, indicating selective pressure. ARDs were not identified in beef products, suggesting that slaughter interventions may reduce the risk of transmission of ARDs to beef consumers. This report highlights the utility and limitations of metagenomics for assessing public health risks regarding antimicrobial resistance, and demonstrates that environmental pathways may represent a greater risk than the food supply. 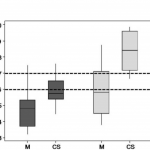 Foodborne illnesses caused by Escherichia coli are one of the most important gastrointestinal diseases and therefore represent a public health risk. The presence of E. coli in water or in products such as shrimp indicates fecal contamination. However, indicator microorganisms can be used to evaluate the microbiological quality of food sold in markets. This study focused on detecting isolates of E. coli containing the genes stx1A, stx2A, eae, LTI, STa, STb, aggR and pCVD432 in chilled shrimp sold in street markets in the municipality of SÃ£o Paulo, Brazil, and to assess the microbiological quality of this product. (…) The detection of EPEC and ETEC pathotypes in chilled shrimp sold in street markets in Brazil provides useful epidemiological information for public health authorities to improve food safety and public health. 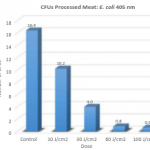 Visible light in the blue range (405 nm) was administered to processed meat that had been inoculated with Escherichia coli. One application of light energy at doses of 10, 30, 60, and 100 J/cm2 was applied, in vitro. In the case of vegetables contaminated with Salmonella (cucumbers), 464 nm light was used at 6, 12, and 18 J/cm2. (…) Kill rates of 80.23—100% were obtained. Blue light, delivered in the wavelength/dose combinations used in this study is an effective inhibitor of both E. coli and Salmonella on actual foodstuffs. Blue light should be considered as a potentially effective tool in the effort to protect humans from foodborne illnesses.