The ASM Journal of Microbiology & Biology Education recently released a special themed issue focusing on Scientific Citizenship (table of contents) that was guest edited by Jack Gilbert, Karen Klyczek and Samantha Elliott. In this issue, the editors seek to address the question: How can we engage people in science? And they hope to provide a snapshot of current ideas and best practices. There are 40 articles included in this special issue. Here I provide some highlights from the first six articles in the section on Scientific Citizenship: Perspectives on Citizen Science.

For many, citizen science offers the most promise for engaging people regardless of age or background in science. What is citizen science? Citizen science can be defined as public participation in scientific research projects, usually by volunteers who collaborate with scientists and researchers to increase scientific knowledge. It is also referred to as participatory research.

The issue begins an excellent article by Dunn et al. entitled The Tragedy of the Unexamined Cat: Why K—12 and University Education Are Still in the Dark Ages and How Citizen Science Allows for a Renaissance. In it they describe how science education remains in the dark ages by emphasizing the memorization of facts rather than engaging students in scientific discovery.

“The world is dissected to see what others discovered years before. In many cases this dissection is literal (and hence remarkably similar in appearance to the end of the dark ages). A cat, for example, or a fetal pig, is set out on a table and the students gather around to dissect the animal and, in doing so, see what the book says should be there, inside. If something in the cat deviates from what is in the book because of, say, a congenital deformity, the student with the deviant cat is asked to look at a neighbor’s cat.”

This sounds familiar to me (and I suspect to many of you). This approach is misguided because much of what we think we know now will turn out to be wrong. Dunn et al. further discuss how the integration of citizen science into curricula will revolutionize how science is taught and allow students to make new discoveries and contribute to the advancement of knowledge.

In The Power of Engaging Citizen Scientists for Scientific Progress, Garbarino and Mason illustrate how a number of recent projects from a variety of disciplines successfully engaged citizen scientists in research. 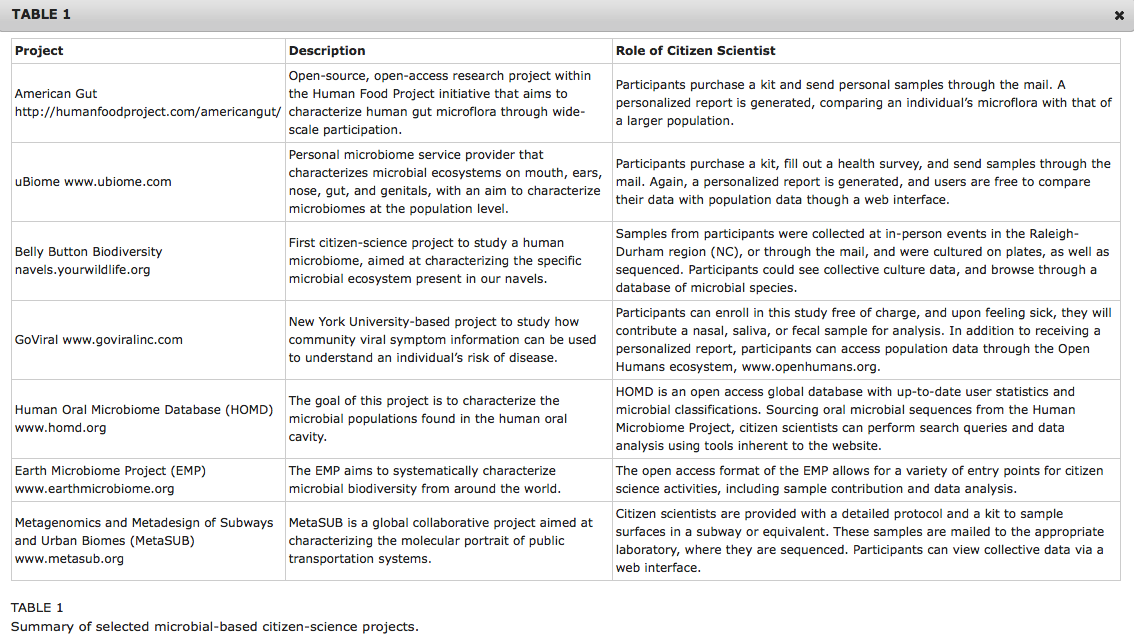 In Citizen Science Initiatives: Engaging the Public and Demystifying Science,
Van Vliet and Moore discuss how technology (especially the internet and smart phones) has opened up new avenues for public engagement in scientific collaborations. They define what citizen science is and describe a number of different citizen science projects, including our very own Project MERCURRI. 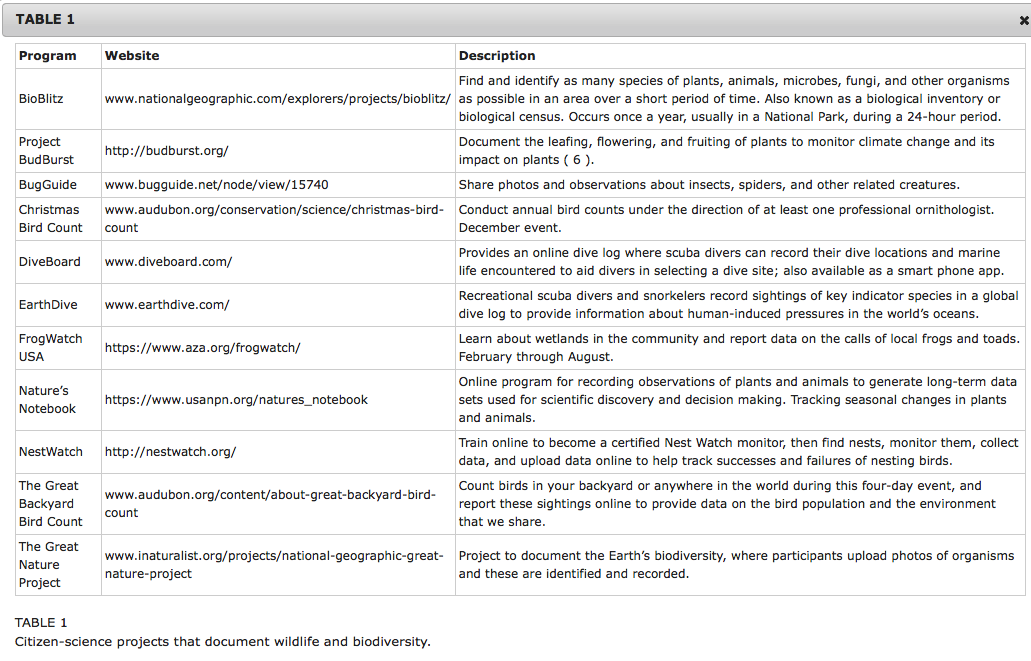 In Current Approaches in Implementing Citizen Science in the Classroom, Shah and Martinez discuss how citizen science can offer students practical experiences in scientific inquiry, critical thinking, and problem solving and provide examples of projects that are appropriate for grades K-12. 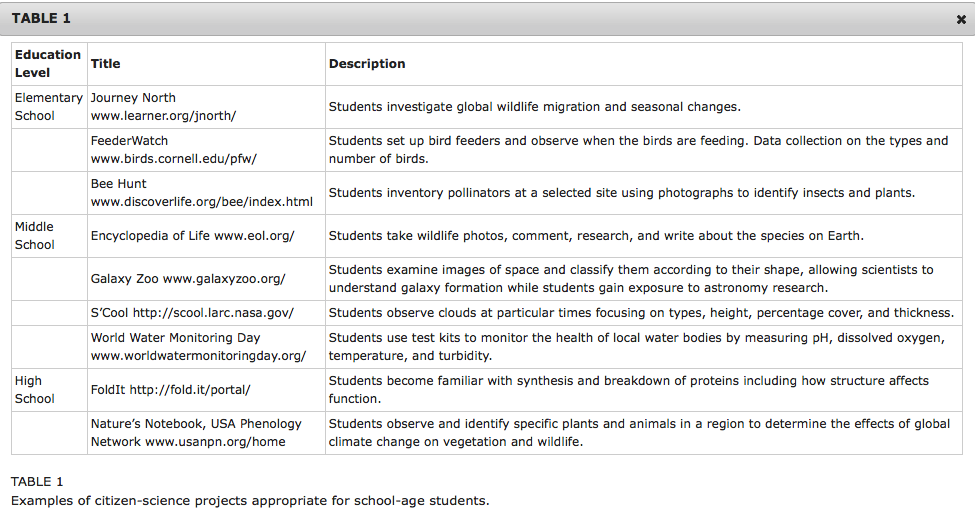 In Microbes Should Be Central to Ecological Education and Outreach, Barberan et al. discuss how microorganisms are neglected in environmental education and they argue persuasively for the inclusion of microbial ecology across education levels. In figure 1, they show that scientific interest in microbial ecology has grown steadily in the past sixty years. Yet most school children are taught that microbes are germs that are associated with disease and improper hygiene. Even undergraduate biology students tend to learn only about the role of microorganisms in photosynthesis and cellular respiration, rather than the fundamental roles played by microbes in ecosystems and global processes. Like the other papers in this section of the citizen science issue, they also review citizen science projects (see table below) focusing on those involving the study of microorganisms and suggest that these can be an effective way to engage students from a wide range of backgrounds and experiences as well as the general public. 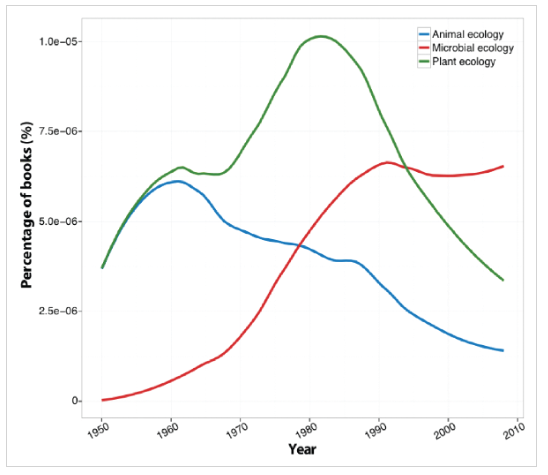 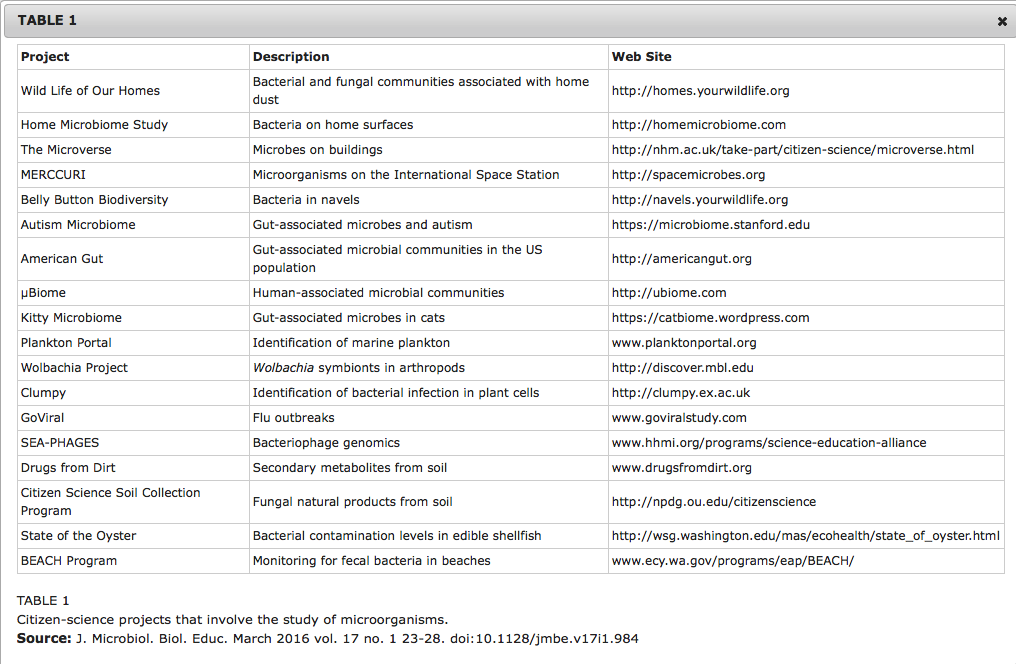 Finally in The Engaged Microbiologist: Bringing the Microbiological Sciences to the K—12 Community, Westenberg discusses how scientific societies such as ASM provide resources that help teachers engage K-12 students in microbiology studies and the critical role that citizen science projects can play.  It is particularly useful to know that the ASM Committee on K—12 Outreach provides opportunities and materials for ASM members to interact with the K—12 community. Projects including “Bacteria that help and hurt cows” or “ What makes flatulence” are available on the ASM Education website.

I have some bias towards this special issue because I am a co-author on an article describing what we learned while running campaigns for three different science projects on the crowdfunding platforms: Indiegogo, Experiment and Kickstarter.  Our article is entitled
Crowdfunding Campaigns Help Researchers Launch Projects and Generate Outreach. Given the challenges faced by many researchers in garnering funding for new and innovative projects from traditional funding sources, many are turning to crowdfunding as a way to raise seed money for scientific research. And in the case of kittybiome, it also provided the opportunity for outreach in the launching of a citizen science project on the microbiome of cats.