Review: The Anthropocene: a conspicuous stratigraphical signal of anthropogenic changes in production and consumption across the biosphere – Mark Williams – Earth’s Future (OA) 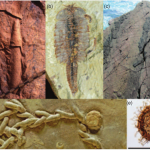 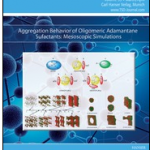 The proper cleaning of used dishes provides an essential means to maintain a sufficient hygiene level on food contact surfaces. However, little is known on the microbiological quality of domestic dishwashers themselves, especially in relation to consumer habits. This study investigated dishwashers in German households to analyse the number and composition of microbial colonisers and their putative impact on dishwashing hygiene. Although the microbiological status of dishwashers appeared to depend on multiple factors, data suggest that a trend towards lower temperatures might effect in a decreased hygiene. 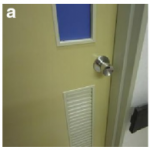 (…) We monitored doorknob contamination in a university hospital using an ATP bioluminescence assay and stamp agar method. (…) When comparing ATP values on the same type of doorknobs, significant differences in contamination were demonstrated among several clinical rooms and several rooms in wards during all three seasons. No correlation was observed between ATP values on clinical-examination-room doorknobs and outpatient numbers, or between ATP values at any monitoring point and microbial colony-forming units. ATP values on clinical-examination-room doorknobs were reduced after cleaning according to instructions. (…) Our findings confirm the need to improve routine decontamination in clinical departments. We need to analyze further the relationship between hospital-acquired infections and doorknob contamination, as assessed by ATP assay in clinics. 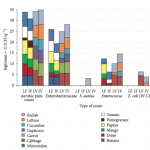 (…) This study was aimed at identifying some microbial communities of fresh produce by analyzing 105 samples of imported fresh fruits and vegetables originated from different countries in the world including local samples (Oman) for aerobic plate count and the counts of Enterobacteriaceae, Enterococcus, and Staphylococcus aureus. The isolated bacteria were identified by molecular (PCR) and biochemical methods (VITEK 2). Enterobacteriaceae occurred in 60% of fruits and 91% of vegetables. Enterococcus was isolated from 20% of fruits and 42% of vegetables.(…) Phylogenetic trees showed no relationship between clustering of the isolates based on the 16S rRNA gene and the original countries of fresh produce. Intercountry passage of opportunistic pathogens in fresh produce cannot be ruled out, which requires better management. 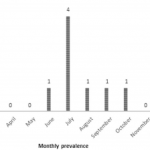 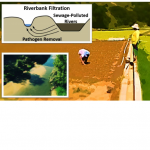 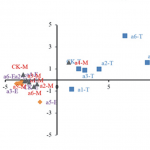 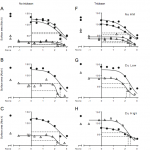 (…) In this study, the tolerance to triclosan was examined for soil microbial communities chronically pre-exposed to one of two heavy metals (Cu or Zn) and the antimicrobial triclosan. This was investigated in two different soil types.(…) Exposure to mixtures of both triclosan and copper in the Horotiu sandy loam reduced microbial biomass, increased metabolic activity and reduced microbial tolerance to triclosan. (…) Mixture effects could become a cause for concern when soil microbial communities are exposed to triclosan in fertile soils with copper concentrations in excess of 50 mg kgâˆ’1 and could be especially important in the more coarsely textured soils. Current regulations for soil contaminants only consider the risk and effects of single contaminants. Greater protection of soil resources could result from considering mixture effects and soil types. 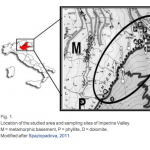 Soil contamination may influence negatively soil health, which often limits and sometimes disqualifies soil biodiversity and decreases plant growth. However, the increased concentration and distribution of potentially toxic elements (PTEs) in soils by mismanagement of industrial activities, overuse of agrochemicals, and waste disposal are causing worldwide concern. This study focused at developing an early warning tool, based on a consortium of different microbial enzymes, for the assessment and monitoring of soil health in response to heavy metal pollution. Soils were collected from an abandoned mine area in northeast Italy, and the concentration of different heavy metals (…) were measured and analyzed. (…) This study clearly highlights in situ interactions between different patterns of PTEs, represented by different combinations of heavy metals, and enzymatic activity of soil microbial communities, and demonstrate the type of interactions taking place between heavy metals, soil properties, and enzymatic activities. (…) 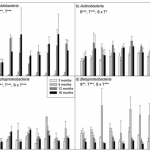 (…) The use of artificial soils that differ only in their mineral composition (illite, montmorillonite, ferrihydrite, boehmite) and the presence of charcoal, but not in soil texture and organic composition, offered a unique opportunity to study composition, function and succession of soil microorganisms colonizing newly exposed organo-mineral surfaces. Artificial soils were incubated with a microbial inoculum from an arable topsoil at constant temperature (20 °C) and moisture conditions for up to 18 months. (…) Discriminant analyses of principal components of PLFAs showed that microbial community structure changed over a period of 18 months toward similar communities for all artificial soils at the end of incubation. (…). The artificial soils experiment clearly showed that changes in substrate availability as well as mineral properties are important drivers for the development of microbial communities. 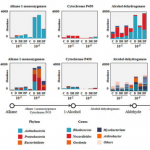 (…) Here, we assess the role of microbial diversity in ecological function and remediation strategies in diesel-contaminated soils. Soil microbial diversity was manipulated using a removal by dilution approach and microbial functions were determined using both metagenomic analyses and enzymatic assays. A shift from Proteobacteria- to Actinobacteria-dominant communities was observed when species diversity was reduced. Metagenomic analysis showed that a large proportion of functional gene categories were significantly altered by the reduction in biodiversity. (…) Our results suggest that the relationship between microbial diversity and ecological function involves trade-offs among ecological processes, and should not be generalized as a positive, neutral, or negative relationship. 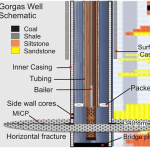 A primary environmental risk from unconventional oil and gas development or carbon sequestration is subsurface fluid leakage in the near wellbore environment. A potential solution to remediate leakage pathways is to promote microbially induced calcium carbonate precipitation (MICP) to plug fractures and reduce permeability in porous materials. (…) In this study, MICP was promoted in a fractured sandstone layer within the Fayette Sandstone Formation 340.8 m below ground surface using conventional oil field subsurface fluid delivery technologies (…). After 24 urea/calcium solution and 6 microbial (Sporosarcina pasteurii) suspension injections, the injectivity was decreased (…) and a reduction in the in-well pressure falloff (…) was observed. (…) This study suggests MICP is a promising tool for sealing subsurface fractures in the near wellbore environment.

2 thoughts on “New papers on microbiology of the built environment, March 22, 2016”