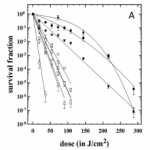 (…) Here we report the findings of a multicenter in vitro study performed to assess the antimicrobial activity of 400-nm blue light against bacteria in both planktonic and biofilm growth modes. Blue light was tested against a panel of 34 bacterial isolates (clinical and type strains) (…) All planktonic-phase bacteria were susceptible to blue light treatment, with the majority (71%) demonstrating a â‰¥5-log10 decrease in viability after 15 to 30 min of exposure (54 J/cm2 to 108 J/cm2). Bacterial biofilms were also highly susceptible to blue light, with significant reduction in seeding observed for all isolates at all levels of exposure. These results warrant further investigation of blue light as a novel decontamination strategy for the nosocomial environment, as well as additional wider decontamination applications.

Contribution of Vegetation to the Microbial Composition of Nearby Outdoor Air
Despoina S. Lymperopoulou – Applied and Environmental Microbiology (OA) 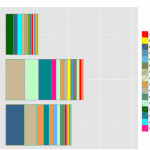 Given that epiphytic microbes are often found in large population sizes on plants, we tested the hypothesis that plants are quantitatively important local sources of airborne microorganisms. (…) Nonmetric multidimensional scaling revealed that the composition of airborne bacteria in upwind air samples grouped separately from that of downwind air samples, while communities on plants and downwind air could not be distinguished. In contrast, fungal taxa in air samples were more similar to each other than to the fungal epiphytes. A source-tracking algorithm revealed that up to 50% of airborne bacteria in downwind air samples were presumably of local plant origin.(…) Emigration of epiphytic bacteria and, to a lesser extent, fungi, from plants can thus influence the microbial composition of nearby air, a finding that has important implications for surrounding ecosystems, including the built environment into which outdoor air can penetrate. 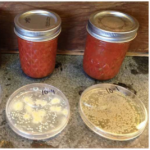 Food spoilage has an enormous economic impact, and microbial food spoilage plays a significant role in food waste and loss; subsequently, an equally significant portion of undergraduate food microbiology instruction should be dedicated to spoilage microbiology. Here, we describe a set of undergraduate microbiology laboratory exercises that focus specifically on food spoilage which were taught in 2 lab periods as part of the undergraduate food microbiology lab curriculum at Cornell University. The lab was broken down into 3 exercises. Two exercises lead students to determine the likely source of contamination in a canned salsa through (exercise 1a) plating and observation of colony morphology and (exercise 1b) determination of the thermal resistance for those isolates. The final exercise (2) involved detection of the spoilage bacterium Alicyclobacillus in apple juice. (…) Downloadable handouts and stepwise instructions are available as supporting information. 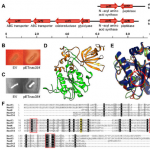 (…) We have constructed a metagenomic library in Escherichia coli DH10b with environmental DNA (eDNA) isolated from the microbial community of a slaughterhouse drain biofilm consisting mainly of species from the family Flavobacteriaceae. By functional screening of this library we have identified several lipases, proteases and two clones (SA343 and SA354) with biosurfactant and hemolytic activities. Sequence analysis of the respective eDNA fragments and subsequent structure homology modelling identified genes encoding putative N-acyl amino acid synthases with a unique two-domain organisation. (…) This is the first report describing the successful application of functional high-throughput screening assays for the identification of biosurfactant producing clones within a metagenomic library. 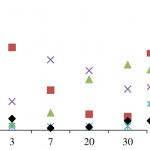 Knowledge regarding microaerophilic and anaerobic specific spoilage organisms (SSOs) is crucial for an appropriate evaluation of vacuum-packed ham. The objective of this study was to characterize the SSO community in vacuum-packed ham by a culture-dependent technique and MiSeq next-generation sequencing (NGS) platform. The relation between changes among the SSO group in the ham and changes in sensory characteristics of the product was also assessed.(…)  A temperature of 4 °C favoured the development of mesophilic and psychrophilic/ psychrotrophic flora, mainly Lactobacillaceae, Enterobacteriaceae and Micrococcaceae families. A high ratio of Brochothrix thermosphacta species and new, cold-tolerant Clostridium spp. was also observed. The growth of these microorganisms facilitated changes in the pH value and organoleptic characteristics of the product. (…) 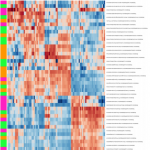 (…)  The aims of this study were to learn more about the possible influence of the meat processing environment on initial fresh meat contamination and to investigate the differences between small-scale retail distribution (SD) and large-scale retail distribution (LD) facilities. (…) Samples included fresh beef and pork cuts and swab samples from the knife, the chopping board, and the butcher’s hand. (…) The 16S rRNA sequencing analysis showed that core microbiota were shared by 80% of the samples and included Pseudomonas spp., Streptococcus spp., Brochothrix spp., Psychrobacter spp., and Acinetobacter spp. (…) . Our results highlighted the importance of the processing environment in contributing to the initial microbial levels of meat and clearly showed that the type of retail facility (LD or SD) did not apparently affect the contamination. 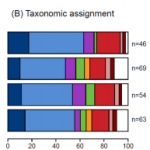 Raw sausages are perishable foodstuffs; reducing their salt content raises questions about a possible increased spoilage of these products. In this study, we evaluated the influence of salt reduction (from 2.0% to 1.5% [wt/wt]), in combination with two types of packaging (modified atmosphere [50% mix of CO2-N2] and vacuum packaging), on the onset of spoilage and on the diversity of spoilage-associated bacteria. After 21 days of storage at 8°C, spoilage was easily observed, characterized by noticeable graying of the products and the production of gas and off-odors defined as rancid, sulfurous, or sour. (…) Our results demonstrate that salt reduction, particularly when it is combined with CO2-enriched packaging, promotes faster spoilage of raw sausages by lowering the overall bacterial diversity (both richness and evenness). 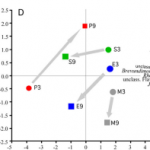 Effect of Co-Composting Cattle Manure with Construction and Demolition Waste on the Archaeal, Bacterial, and Fungal Microbiota, and on Antimicrobial Resistance Determinants – Devin B. Holman – PLOS ONE (OA) 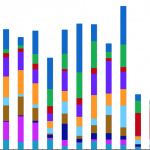 (…) the archaeal, bacterial, and fungal microbiota of two different types of composted cattle manure and one co-composted with construction and demolition waste, were assessed over a 99-day composting period. The microbiota of the three compost mixtures did not differ, but significant changes over time and by sampling depth were observed. (…) The concentration of 12 antimicrobial resistance determinants in the compost mixtures was also determined, and 10 of these determinants decreased significantly from days 0 to 99. The addition of construction and demolition waste did not affect the persistence of antimicrobial resistance genes or community structure of the compost microbiota and therefore co-composting construction and demolition waste with cattle manure offers a safe, viable way to divert this waste from landfills. 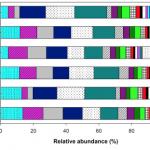 (…) The aim of the present study was to identify active microbial genes in heavy metals, i.e., Cu, Zn, Cd, Pb and Hg, and antibiotic resistomes of polluted and pristine mangrove sediments through the comparative analysis of metatranscriptome data. (…)  The taxonomic profiling of metatranscriptome sequences suggests that members of Gammaproteobacteria and Deltaproteobacteria classes contribute to the detoxification of the polluted soil. Desulfobacterium autotrophicum was the most abundant microorganism in the oil-impacted site and displayed specific functions related to heavy metal resistance, potentially playing a key role in the successful persistence of the microbial community of this site. 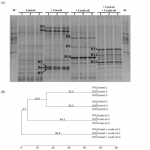