The last few years has seen an increase in the interest to bring living systems into the process of design. Work with living systems, nonetheless, presents several challenges. Aspects such as access to specialists’ labs, samples of living systems and knowledge to conduct experiments in controlled settings become barriers which prevent designers from developing a direct, material engagement with the material. (…) We will develop this argument by reporting on our experience in designing and delivering the primer component of a themed design studio, structured around bacterial spores as hygroscopic components of building facades. The six-week design project asked students to consider the behavior or bacterial spores, and to imagine a number of systems in which they could be employed as actuators of a membrane system which responded to fluctuations in humidity. The module is interesting in that it negotiates some of the challenges often faced by designers who want to develop a material engagement with living systems, and to produce informed speculations about their potential in architectural design.

Microbial colonization of prepainted steel, commonly used in roofing applications, impacts their aesthetics, durability, and functionality. Understanding the relevant organisms and the mechanisms by which colonization occurs would provide valuable information that can be subsequently used to design fouling prevention strategies. Here, next-generation sequencing and microbial community finger printing (T-RFLP) were used to study the community composition of microbes colonizing prepainted steel roofing materials at Burrawang, Australia and Kapar, Malaysia over a 52-week period. (…)  The study demonstrates the utility of molecular ecology tools to identify and characterize microbial communities associated with the fouling of painted steel surfaces and ultimately can enable the targeted development of control strategies based on the dominant species responsible for fouling.

Dunno if this is such a good idea, spreading viruses around amongst sick people, but it did help: Application of Bacteriophage-containing Aerosol against Nosocomial Transmission of Carbapenem-Resistant Acinetobacter baumannii in an Intensive Care Unit – Yu-Huai Ho – PLOS ONE

(…)  Human skin is home to a diverse, skin-habitat specific community of microorganisms; this includes members that exist across the ecological spectrum from pathogen through commensal to mutualist. Most evidence suggests that the skin microbiota is likely of direct benefit to the host, and only rarely exhibits pathogenicity. This complex ecological context suggests that the conception of hygiene as a unilateral reduction or removal of microbes has outlived its usefulness. As such, we suggest the explicit definition of hygiene as ‘those actions and practices that reduce the spread or transmission of pathogenic microorganisms, and thus reduce the incidence of disease’. To examine the implications of this definition, we review the literature related to hand drying as an aspect of hand hygienic practice. (…)

The International Space Station (ISS) represents a unique biotope for the human crew but also for introduced microorganisms. Microbes experience selective pressures such as microgravity, desiccation, poor nutrient-availability due to cleaning, and an increased radiation level. We hypothesized that the microbial community inside the ISS is modified by adapting to these stresses. For this reason, we analyzed 8–12 years old dust samples from Russian ISS modules with major focus on the long-time surviving portion of the microbial community. (…) Our findings reveal (i) the occurrence of living, hardy microorganisms in archived Russian ISS dust samples, (ii) a profound resistance capacity of ISS microorganisms against environmental stresses, and (iii) the presence of archaeal signatures on board. In addition, we found indications that the microbial community in the Russian segment dust samples was different to recently reported US American ISS microbiota.

TTIs are smart labels designed to monitor food product temperature history that could be used to reflect quality throughout the cold chain. The objectives of this study are to develop a microbial TTI for vacuum-packed grouper fish fillets and then to test if TTI reflects microbiological and biochemical changes in fish fillets. Under constant and dynamic storage conditions, colour change can indicate three grades of fish freshness—very fresh, fresh, and spoiled—based on total volatile basic nitrogen (TVB-N) levels. Overall, similar activation energies observed in the time-temperature integrator (TTI) responses and the TVB-N of grouper fish fillets make the microbial TTI a good candidate for monitoring the freshness of fish products.

Several biosurfactants with antagonistic activity are produced by a variety of microorganisms. Lipopeptides (LPPs) produced by some Bacillus strains, including surfactin, fengycin and iturin are synthesized nonribosomally by mega-peptide synthetase (NRPS) units and they are particularly relevant as antifungal agents. Characterisation, identification and evaluation of the potentials of several bacterial isolates were undertaken in order to establish the production of active lipopeptides against biodeteriogenic fungi from heritage assets. Analysis of the iturin operon revealed four open reading frames (ORFs) with the structural organisation of the peptide synthetases. (…)

Biological Treatment of Landfill Leachate at Elevated Temperature in the Presence of Polyurethane Foam of Various Porosity – Justyna Koc-Jurczyk – Clean Soil Air Water ($6 to rent, $38 to own)

Application of sequencing batch reactors (SBR) for treatment of leachate from old, stabilized landfills, could be still an economically viable solution, as far as nitrogen removal is concerned. Very low amounts of accesible organic compounds requires an unconventional approach to treatment technology. In this paper the authors proposed utilisation of polyurethane (PU) foam of various porosity as a biomass carrier, hydraulic retention time (HRT) extended to 2 days and temperature elevated to 37°C, to stimulate simultaneous nitrification and denitrification (SND). The porosity of PU carriers had no effect on the efficiency of organic compounds removal, whilst the ammonium nitrogen (N-NH4+) removal efficiency was highest in the reactor (SBR2) equipped with PU cuboid-shape carriers of 30 pores per inch (ppi), reaching 77.6%. (…)

Degradation of a fluoroquinolone antibiotic in an urbanized stretch of the River Tiber – Anna Barra Caracciolo – Microchemical Journal ($41.95)

The widespread detection of antibiotics in terrestrial and aquatic systems has engendered significant scientific and regulatory concern. Overall, knowledge concerning the ecotoxicology and sub-lethal effects in water is scarce, but some experimental studies show that antibiotics can induce pathogen resistance and they can also have detrimental effects on natural microbial communities and their key functions. The main aim of this study was to investigate the occurrence of the biodegradation and photodegradation processes of the fluoroquinolone ciprofloxacin (CIP) in the River Tiber waters, in a stretch highly impacted from human pressure. (…)  The key role of light in CIP disappearance was confirmed, but also its biodegradation in natural river water was demonstrated. (…) The overall results were supported by the increase in live cell numbers with the decrease of CIP concentrations both in the dark and light condition. 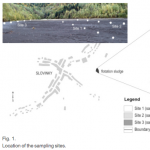 Technosols or technogenic substrates contaminated by potentially toxic elements as a result of iron mining causes not only contamination of the surrounding ecosystem but may also lead to changes of the extent, abundance, structure and activity of soil microbial community. Microbial biomass were significantly inhibited mainly by exceeding limits of potentially toxic metals as arsenic (…), copper (…), manganese (…), alkaline and strong alkaline pH conditions and minimal contents of organic nutrients. All of the 14 bacterial isolates, belonged to 4 bacterial phyla, Actinobacteria, Firmicutes; β- and γ-Proteobacteria. Thirteen genera and 20 species of microscopic filamentous fungi were recovered. (…)