I was recently asked to spearhead the writing of a review centered around the interaction between the concept of hygiene and our increasingly nuanced understanding of the human skin microbiome for the Biology and the Built Environment (BioBE) Center at the University of Oregon.

This review began with an invitation from Dyson to conduct an impartial review of hand drying studies, which have been mired in competing interests and faulty methods. We saw an opportunity to not only provide an unbiased review of the literature, but also to ask a more fundamental question: how should hygiene be defined in light of our evolving perspective of the human and indoor microbiome?  We delivered a brief summary to Dyson (here) and then built upon that work to develop this question.

As we started digging into the body of literature on hand hygiene, two things struck us as peculiar: the first was that in the hundreds of studies explicitly examining hygiene, the concept was never explicitly defined; the second was that there seemed to be a clear division between skin microbiological investigations coming from clinically and ecologically informed perspectives, with clinical research generally relying on older cultivation-dependent techniques. These two issues became the drivers for our review, and our goal was to provide an explicit definition of hygiene that would help to bridge the gap between the clinical skin microbiology literature and the newer human-associated microbial ecology literature. We were then able to use the body of literature on hand drying as a case-study to examine the implications of using a microbial ecology-based approach to defining hygiene.

You can read the shorter, white page summary of the review on the BioBE blog: https://biobe.uoregon.edu/2016/11/04/cleanliness-in-context

In the first section, we start seeing some of the limitations of cultivation-dependent methods, and how those limitations combine with implicit assumptions about the concept of hygiene. One thing that stands out to me from a thorough reading of clinical literature on hand hygiene is how often the idea of sterilization is used as a stand-in for the idea of hygiene — one result of the complete adoption of the germ theory of disease is the common misconception that “all microbes are germs”. This is apparent in the majority of studies of hygiene, particularly reflected in the focus on bulk reduction in microbial load, regardless of the identities of those microbes. I would, however, like to acknowledge Allison Aiello and Elaine Larson’s careful 2002 review, “What is the evidence for a causal link between hygiene and infections?“, which goes considerably beyond thinking of all microbes as germs and examines hundreds of studies, pulling out those that actually examine health outcomes as a dependent variable. Their review lays the conceptual foundations for what we are trying to do in our review.

In bridging into the second section, which outlines human-associated microbial ecology, we wanted to clearly illustrate the advances in techniques that the field utilizes. We put together this simple, but hopefully informative, conceptual figure to help: 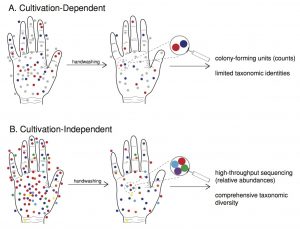 Figure 1: Cultivation-dependent methods (A) are commonly used to study aspects of hand hygiene; many microbes are not detectable using this methodology (represented in grey). Handwashing reduces bulk microbial load, and cultivation yields data showing changes in the numbers of colony-forming units (counts); some studies identify colonies using morphological or molecular methods, yielding limited taxonomic information. Cultivation-independent methods (B), including high-throughput DNA sequencing, are commonly used to study the microbial ecology of the skin. Using these methods, it is possible to quantify alterations in relative abundance of bacterial populations with treatment (such as handwashing), obtain deep, comprehensive taxonomic diversity estimates; depending on technique, it may be possible to also obtain information on functional metabolic pathways (using metagenomics), assessment of proportion of the community that is active (using rRNA / rDNA comparisons, or live/dead cell assays), among other things. 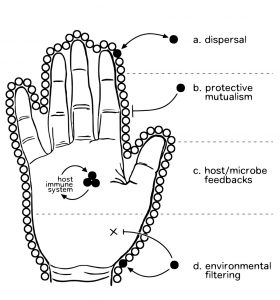 Figure 2: Conceptual illustration of important ecological factors impacted by hygienic practice. Dispersal (a) is the movement of organisms across space; a patch of habitat is continuously sampling the pool of available colonists, which vary across a variety of traits (dispersal efficiency, rate of establishment, ex host survivability, etc.) (Vellend 2010); high dispersal rates due to human behaviors (e.g., microbial resuspension due to drying hands with an air dryer) have the potential to disperse both beneficial and harmful bacteria alike. Protective mutualisms (b) function through the occupation of niche space; harmful microorganisms are excluded from colonization via saturation of available habitat by benign, non-harmful microbes (Poisot et al. 2014). Host/microbe feedbacks (c) occur via the microbiota’s ability to activate host immune response, and the host immune system’s ability to modulate the skin microbiota (Chehoud et al, 2013; Garcia-Garcera et al, 2012; Oh et al, 2013) — multiple pathways, including IL-1 signalling (Naik et al 2012) and differential T-cell activation (Seneschal et al 2012), are involved — such feedbacks between host immune response and the skin microbiota are thought to be important to the maintenance of a healthy microbiota and the exclusion of invasive pathogenic microbes (Zhang et al 2015). Environmental filtering (d) works on the traits of dispersed colonists — microbes that can survive in a given set of environmental conditions are filtered from the pool of potential colonists (Vellend 2010): the resources and conditions found there permit the survival/growth of some organisms but not others. The importance of diversity of the microbiota to each of these ecological factors should not be underestimated; interactions between taxa may modulate their ecological roles, and community variation across a range of ecological traits may be altered by changes in community membership or structure (HMPC, 2012).

Coming to the third and final section, it should be clear to the reader that future work on hygiene would benefit from integrating modern techniques and an ecological perspective from recent human microbiome research. To facilitate that, we believe that it would be helpful to have a clear, concise definition of hygiene from which to work. This is probably the most important moment from our paper:

The evidence that microbes are essential for maintaining a healthy skin microbiota supports the idea that hygienic practices aimed at the simple removal of microbes may not be the best approach. Rather, hygienic practices should aim to reduce pathogenic microorganisms and simultaneously increase and maintain the presence of beneficial microorganisms essential for host protection. It is clear that microbial colonization of the skin is not deleterious, per se. Humans are covered in an imperceptible skim of microbial life at all times, with which we interact constantly. We posit that the conception of hygiene as a unilateral reduction or removal of microbial load has outlived its usefulness and that a definition of hygiene that is quantitative, uses modern molecular biology tools, and is focused on disease reduction is needed. As such, we explicitly define hygiene as ‘those actions and practices that reduce the spread or transmission of pathogenic microorganisms, and thus reduce the incidence of disease’.

Let me repeat that last part: we explicitly define hygiene as ‘those actions and practices that reduce the spread or transmission of pathogenic microorganisms, and thus reduce the incidence of disease’. We feel that it is incredibly important to define hygiene in terms of health outcomes, not just in terms of reduction in number of microbes. This allows for research (consider, for example, probiotics research) to address the root of hygienic practice: cleanliness in pursuit of improved health.

From the hand drying example, it is clear that a standard definition of hygiene would be helpful: it turns out the vast majority of research on the hygienic aspects of hand drying has been funded by either the paper towel industry or the blow drier industry as advertising tools. There appears to be something of a feud going on between these two competing industries. Sadly, there is much about the current state of hand drying literature that is clearly partisan, and it is difficult to evaluate claims from either side because they define hygiene differently.

Despite there being an obvious interplay between these two divisions, many of the concerns on either side remain unaddressed. Utilizing a definition of hygiene that explicitly relies on reduction in disease spread would address concerns on both sides of the debate: there is currently no evidence linking aerosolization of residual moisture (and associated microbes) with the actual spread of disease. Likewise, despite demonstrations that wet hands allow for increased bacterial transmission, there does not seem to be evidence linking wet hands after washing to deleterious health outcomes. The complex ecological context of the hand microbiota may modulate effects of both aerosolization and prolonged moistening. Additionally, the majority of hand drying research largely ignores the relative hygienic contribution of the hand washing step; understanding the relative contribution of washing to hygienic efficacy is necessary to put the hand drying literature in proper context.

The experience of working on this review has been incredibly positive: I’ve gotten to read deeply in corners of the scientific literature that I would not have expected I would be delving into even six months ago, I’ve learned a number of beautiful and startling things, and I believe that we have been able to contribute something necessary and worthwhile to the scientific discussion of hygiene. There is a gradual paradigm shift occurring right now in the clinical sciences, with germ theory being gently replaced by a more nuanced theory of disease that takes into account the beneficial role that our symbiotic microbiome plays; this review, I hope, will be a helpful building block for that new paradigm.

One thought on “The concept of hygiene and the human microbiome.”