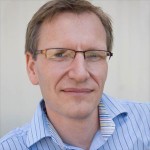 The Sloan Foundation today announced funding for a pilot study looking at the effects of weatherization on the indoor airborne microbiome.  This work will be performed by Largus Angenent at Cornell University.  The full summary of the project is below: