Skip to content
home Meetings and Talks Put a microbe on it: “The Great Indoors” session at the Ecological Society of America’s annual meeting

“Indoors” appeared as a session title for the first time at the annual meeting of the Ecology Society of America after Brendan Bohannan of the BioBE Center at the University of Oregon and Tom Bruns of BIMERC at the University of California organized a session entitled “The Great Indoors: Recent Advances in the Ecology of Built Environments,” held on August 8, 2012, in Portland. Although many ecologists when pressed might admit they entered the field so they could hike through forests or scuba dive in reefs for a living, they are increasingly turning their skills and interest to their primary habitat — the indoors.

During the session, four presentations were followed by an informal discussion on the application of ecological theory to the indoor microbiome, with a particular focus on an idea put forward by Jessica Green, director of the BioBE Center, during her presentation: buildings are ecosystems.

It’s a neat thought — the idea that buildings are places where communities of biological organisms interact with each other and their physical space. There are “hotspots” of growth indoors, places where water combines with the detritus of both the occupants and their behaviors. Some spaces provide more debris than others, no doubt, although few as rich as the commercial chicken houses that Angela Kent of the University of Illinois spoke about in her presentation. For non-commercial spaces, humans are a fundamental part of the building ecosystem, and the movement of people and air can link communities in different buildings. And an intriguing question follows — if buildings are ecosystems, are the indoor microbiota performing ecosystem services, such as transforming pollutants, cycling nutrients or keeping allergens and pathogens at bay? 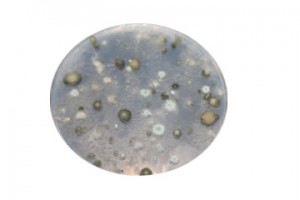 On the other hand, we don’t really know if the microbes detected are actually interacting with each other, let alone alive. The use of molecular methods, such as PCR, lets us detect more microbes than we can with culturing (such as the molds in my bathroom), but the most commonly used molecular methods cannot distinguish between what’s living and what’s already dead or just passing through. Dispersal from the outdoors to the indoors is a major factor in any discussion on the indoor microbiome, and it appears that the indoor ecosystem may be more like a desert than a tropical rain forest.

Of course from an ecological perspective, communities do not stop with the microbes, even in a desert. There are viruses, amoeba, mites, and insects, and a citizen science project is already underway to explore the arthropods in homes.

The ultimate application of ecological questions will be informing human health, and Jordan Peccia of Yale University showed in his presentation how a mold can be more or less allergenic depending on the environmental conditions, such as temperature, in which it grows.  Whether we “put a microbe on it” or not, one is probably already there, and ecological principles can be used to understand how it got there.

One thought on “Put a microbe on it: “The Great Indoors” session at the Ecological Society of America’s annual meeting”