Skip to content
home Miscellaneous The trophic interactions of my face

I was thinking about the fungi on our skin and how much of that we shed. Also, I was curious about how drastic the difference between culturing and PCR-based pyrosequencing would be in showing what fungi are even on our skins. I had a bunch of sequenced skin samples from a study we were doing, but I didn’t have any culture samples. So, I walked around the lab and asked people if I could swab their forehead with basically a Q-tip, then ran each swab over a petri dish with media that contained garlic-infused olive oil (nothing but the best for our fungi friends).

In the first personal offense, the petri dish from my own forehead was the only one that anything grew, some nice white and pink yeasts. 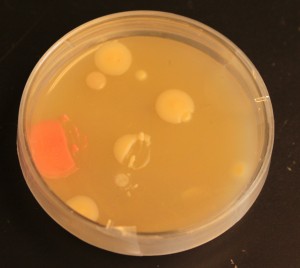 When I tried to isolate each type, I saw something curious: the pink yeast appears to be eating the white yeast! 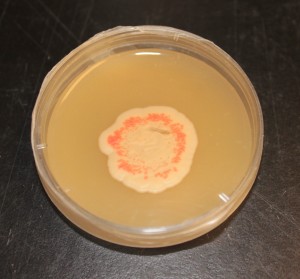 I wasn’t surprised to see the white yeast – it’s most definitely Malassezia, a genus naturally found on skin that contains the species causing dandruff. But the pink stuff? That’s most likely Rhodotorula, one of the pink growths you can find in bathrooms. Is Rhodotorula eating Malassezia? On my face?