These authors used 454 sequencing of 16S to survey bacterial populations in the entrance hall and the ICU of a hospital in Madrid.   Not surprisingly, they found lower bacterial diversity in the ICU (presumably due to selection from antimicrobial agents and practices).  The authors also looked at which taxa were over/under represented in the two locations.  Abstract below:

Understanding microbial populations in hospital environments is crucial for improving human health. Hospital-acquired infections are an increasing problem in intensive care units (ICU). In this work we present an exploration of bacterial diversity at inanimate surfaces of the ICU wards of the University Hospital A CoruÃ±a (Spain), as an example of confined hospital environment subjected to selective pressure, taking the entrance hall of the hospital, an open and crowded environment, as reference. Surface swab samples were collected from both locations and recovered DNA used as template to amplify a hypervariable region of the bacterial 16S rRNA gene. Sequencing of the amplicons was performed at the Roche 454 Sequencing Center using GS-FLX Titanium procedures. Reads were pre-processed and clustered into OTUs (operational taxonomic units), which were further classified. A total of 16 canonical bacterial phyla were detected in both locations. Members of the phyla Firmicutes (mainly Staphylococcus and Streptococcus) and Actinobacteria (mainly Micrococcaceae, Corynebacteriaceae and Brevibacteriaceae) were over-represented in the ICU with respect to the Hall. The phyllum Proteobacteria was also well represented in the ICU, mainly by members of the families Enterobacteriaceae, Methylobacteriaceae and Sphingomonadaceae. In the Hall sample, the phyla Proteobacteria, Bacteroidetes, Deinococcus-Thermus and Cyanobacteria were over-represented with respect to the ICU. Over-representation of Proteobacteria was mainly due to the high abundance of Enterobacteriaceae members. The presented results demonstrate that bacterial diversity differs at the ICU and entrance hall locations. Reduced diversity detected at ICU, relative to the entrance hall, can be explained by its confined character and by the existence of antimicrobial selective pressure. This is the first study using deep sequencing techniques made in hospital wards showing substantial hospital microbial diversity. 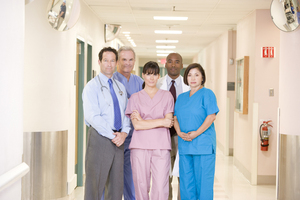