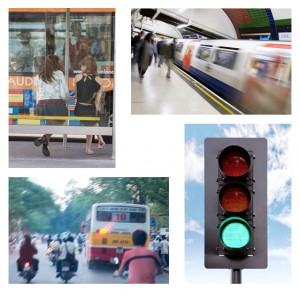 The last of the new Sloan grants is a project called “Transmission and alteration of the human microbiome by urban public transportation systems” which is being managed by Curtis Huttenhower at the Harvard Public School of Health, along with his Co-PI, Jack Spengler.

The ability of enclosed transit systems such as subways to transmit infectious disease is all too apparent, and public surfaces have long endured close scrutiny as enablers of microbial infection. They are one of the predominant loci of human interaction – and thus of microbial transmission – in our built environment. However, remarkably little is known about their capacity to alter their riderships’ healthy commensal microbiota in the absence of acute infection. This project thus determines which, if any, human-associated microbes remain resident on frequently touched surfaces in our surroundings, and can they become permanent residents of other users’ microbiomes?

Urban transportation systems are of particular interest due to their daily use by millions of individuals, where they have the potential to rapidly transmit microbiome alterations or to form a reservoir for metagenomic functionality such as antibiotic resistance. Subway systems specifically are infamous for high microbial loads, which are perceived as harmful, but it is not known whether these microbial communities comprise the same harmless commensals carried in their riderships’ microbiomes. Such environments are also amenable to modulation for improved sanitation practices or construction materials, which we’ll assess by:

1. Testing whether the material, location, or traffic level of public transit surfaces in situ modulate their ability to carry and transmit human-associated microbial communities. We will determine microbial carriage within the Boston MBTA system as it varies with six different surface materials, nine different locations, traffic levels, and cleaning. We hypothesize that some surfaces are more conducive to stable transmissible carriage of viable human-associated communities.

2. Test the degree to which surface traffic or cleaning of transit touchscreen interfaces influences their ability to carry or transmit human-associated microbes. The MBTA, like most modern transit systems, employs touchscreen systems for rider interactions. These are exposed to thousands of potentially pathogenic or identifiable skin microbial communities. We will determine the resident metagenome of public touchscreen ticket vending surfaces as a potential reservoir of microbial function and test its modulation as associated with A) diversity of user interaction, B) frequency of interaction, and C) sanitary intervention.

3. Test in a controlled setting the ability of surface-transmitted skin microbes to stably alter the healthy human microbiome. The degree to which the healthy adult microbiome can be stably altered by environment or intervention is a largely open question. This will be tested in a controlled environment by monitoring human skin microbiomes in the lab as transmitted to and from construction surfaces by healthy volunteers. This will determine whether and how a stable ecosystem is perturbed by an environmentally transmitted microbial community.