The first day at ASM was amazing.   Started off the morning by attending the “Putting ‘Omics to the Test” session which contained talks by Ed DeLong, David Stahl, Nicole Dubilier, Julia Vorholt, and Thomas Shenk.  The overall theme of this session was to look at example where ‘omics data (genomics, proteomics, transcriptomics, etc.) data was used to generate testable hypotheses.  All of the speakers then gave example of where these hypotheses were followed up in the lab.  It was nice to see the emphasis on relating ‘omics data to the lab instead of just as an overview.  I skipped out on the end of this session to see “What the Chimpanzee Microbiome Tells us About the Human Microbiome” by Howard Ochman which was cool.

Went to a special interest session before lunch called “Accomplishments and Legacy of the Soviet Bioweapons Program, 1928-1992” by Raymond Zilinskas from the Center for Non-Proliferation Studies.  His talk was both fascinating and quite scary.

In the afternoon was our microBEnet-sponsored session called “Citizen Microbiology:  Enhancing Microbiology Education and Research with the Help of the Public”.   The goal of this session was to have a series of talks by the few folks who are actually doing citizen microbiology, with a particular focus on problems and issues they’ve encountered.   A good description of the rationale for this session can be found on Jonathan’s blog here.

First Graham Hatfull talked about his awesome phage discovery project which has now involved thousands of students and a number of institutions as well as characterized many many new phages and produced several publications.

Jack Gilbert and Dan Smith then gave a tag-team talk about the home microbiome project they’ve been working on.

Then Darlene Cavlier (founder of Science Cheerleader and SciStarter.com) gave an inspiring talk on those two organizations and on citizen science in general.  I got the feeling a lot of people were surprised at the scope of many of the (non-micro) citizen science projects out there.

This was followed by Jessica Richmond who talked about the uBiome project.

In a very similar vein was the next talk by Antonio Pena who talked about the American Gut Project.

Rounding out the session (in his trademark hysterical and informative style) was Rob Dunn who talked about the Wildlife of Our Homes project and the various “turns” in his life that lead him there.

All in all a great day. 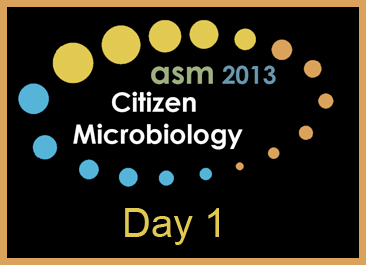