Quick post here.  There is a new paper out of interest to the microBEnet community: PLOS ONE: Monitoring Seasonal Changes in Winery-Resident Microbiota.  From colleagues of mine at UC Davis it discusses culture independent surveys of the Robert Mondavi Institute for Food and Wine Science Winery at UC Davis.

I am running out the door or I would write a longer post about this paper.  But I wanted to make people aware of it.  The abstract is below:

During the transformation of grapes to wine, wine fermentations are exposed to a large area of specialized equipment surfaces within wineries, which may serve as important reservoirs for two-way transfer of microbes between fermentations. However, the role of winery environments in shaping the microbiota of wine fermentations and vectoring wine spoilage organisms is poorly understood at the systems level. Microbial communities inhabiting all major equipment and surfaces in a pilot-scale winery were surveyed over the course of a single harvest to track the appearance of equipment microbiota before, during, and after grape harvest. Results demonstrate that under normal cleaning conditions winery surfaces harbor seasonally fluctuating populations of bacteria and fungi. Surface microbial communities were dependent on the production context at each site, shaped by technological practices, processing stage, and season. During harvest, grape- and fermentation-associated organisms populated most winery surfaces, acting as potential reservoirs for microbial transfer between fermentations. These surfaces harbored large populations of Saccharomyces cerevisiae and other yeasts prior to harvest, potentially serving as an important vector of these yeasts in wine fermentations. However, the majority of the surface communities before and after harvest comprised organisms with no known link to wine fermentations and a near-absence of spoilage-related organisms, suggesting that winery surfaces do not overtly vector wine spoilage microbes under normal operating conditions.

The paper is fully Open Access so anyone can get it and look through it.  Basically they did swabbing of surfaces in the winery, DNA extraction, and then PCR and sequencing of either small subunit rRNA genes (for bacteria and archaea) or ITS regions (for fungi) and then did detailed analysis of the sequence results.  I will try to post more later about the paper but we would welcome comments form anyone out there as well. 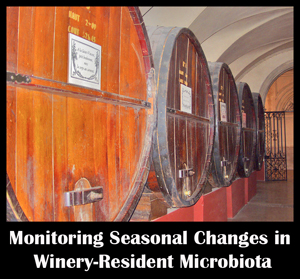